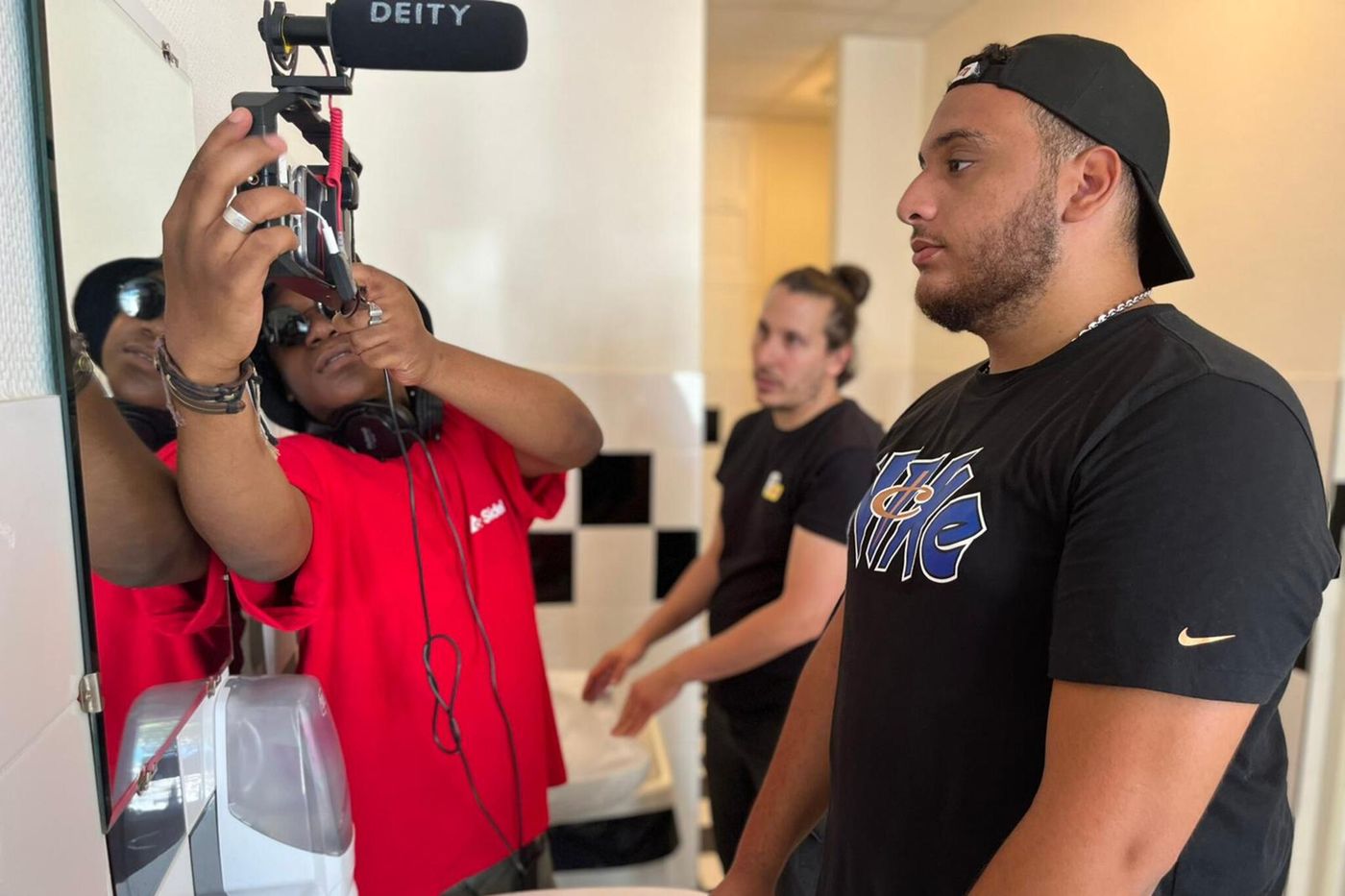 In front of the Erik-Satie room, in Vénissieux, a town in the metropolis of Lyon, a child is lying on the ground: his heart has stopped. ” My baby ! » His mother comes running, desperate. Laughter rings out around them, and soon the whole team is hilarious. It’s sometimes complicated to stay serious during a take… Because it’s really about cinema!

The little boy, Lazare, gets up smiling. Her “mother”, or rather her cousin Inès, 23, is congratulated for her acting. “I had tears in my eyes! », confides one of his comrades. Patrick, 20 years old and director for a day, analyzes the scene with Samir Abdessaied, professional speaker. “Don’t hesitate to film close up to capture the emotion», he advises her.

Like Inès, Patrick and Lazare, they are about twenty amateur filmmakers over 15 years old, divided into four groups, to take part in the session organized by Filme l’avenir in the Lyon area. This free device was launched in 2020 by comedian Jamel Debbouze and director Aurélie Cardin. By the end of August, a team of film professionals will have stopped in 15 cities in France to allow young people from disadvantaged neighborhoods to make ninety-second short films.

The stakes are high for the young people of Venissieux: their films will be in the running for the national competition of the CinéBanlieue festival. The key is professional tutoring for a future production, or even two film pre-purchases by France 3.

In Vénissieux, telephones provided by Filme l’avenir act as cameras. The dialogues are improvised. It’s time for the second take: it’s perfect! “Too bad, I forgot to press “save””, teases Patrick, prankster. This audiovisual student is a regular: this is his second participation in the operation. His goal: to eventually produce his own music videos.

Filme l’avenir identifies young talents. “We want to break down the barriers of social difficulties or lack of contact in the community”, explains Colia Vranici, the project coordinator. Yanis, in his third year of eco-management, plans to pass castings. “With the short film from the last edition, my parents thought I had turned pro! », he laughs. Others, like Inès, are there out of curiosity. ” By being an actress, you can be anyone, and that changes your mind! », she admits.

The day before, everyone received specific training. For Samir, one of the speakers, the first minutes of creating the scenario are decisive. “That’s when you realize the characters of eachhe notes. You have to be careful that everyone has their place and participates.»

In the afternoon, the editing of the films is carried out directly on the telephone by the professionals. However, one of the groups gathered around an editing table, belonging to Hamid, the president of the Venetian association La Perche. He earned it by winning the Filme l’avenir association prize last year. “It’s up to us to motivate young people to come, find a place and spread the information”, he explains. Marked by the experience, he wishes to launch the filming of a web series with his association.

The day ends with a screening in the theater of the Erik-Satie center. Seeing yourself on screen is sometimes not easy for amateur actors. “But feedback from others allows us to learn and improve,” Yanis smiles.

The short films selected will be available on the France TV Slash platform. “The goal is not to occupy their time, but to produce a quality project with these young people and to free their imagination”, concludes Aurélie Cardin.

In 2020, Filme l’avenir is created by Les Ami(e) s du Comedy Club, chaired by Jamel Debbouze, in partnership with France Télévisions, the Ministry of Culture, the National Center for Cinema and the Moving Image (CNC) and the National Agency for Territorial Cohesion (ANCT).

The scheme has trained 750 young amateur filmmakers, in 33 cities in France, including eight overseas.

In two years, 140 short films were made.

On the 2022 tour, 62 local associations are partners and 23 professional speakers take turns.

The competition, open to free participation, ends on September 30, the results will be announced on November 18.

60 films selected this summer will be broadcast on France TV Slash.