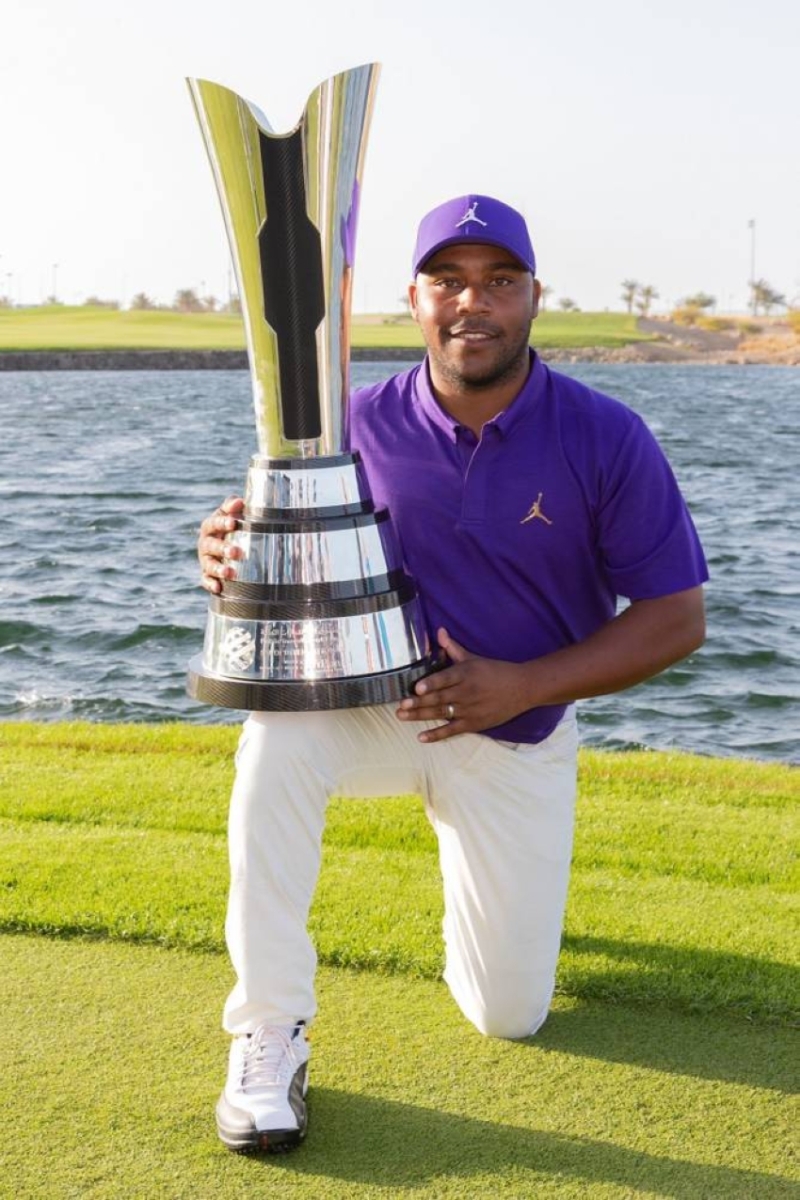 American star Harold Varner won the Saudi International Championship presented by the Public Investment Fund and sponsored by SoftBank for investment advisory, which was held at the Royal Greens Club and Stadium from 3 to 6 February.

Varner won the title after scoring 13 under par, ahead of his compatriot Bubba Watson, who finished second by scoring 12 under par that gave him the lead temporarily until the last hole, and finally put him in front of Spaniard Adri Arnaus, who was third with 10 under par.

It is worth noting that this year’s edition of the Saudi International Championship is the first under the framework of a ten-year partnership between Golf Saudi and the Asian Tour. The defending champion Varner received the largest share of the prize pool ($1 million), Watson received $525,000, while the third place prize of $300,000 went to Arnaus, and England’s Steve Lawton and Australia’s Cameron Smith took the fourth and fifth place prizes 235,000. and 200,000, respectively.

After his dramatic victory on the final hole and scoring an Eagle kick that tipped him at the last moment, Saudi international champion Varner said: “It was a crazy feeling, I couldn’t help myself when I saw the ball go into the hole and you all saw my reaction and celebration with my assistant Chris. It’s unbelievable and the best ending. possible.

He added, “My experience here was really special, and it’s great to win after a hiatus from titles. I loved the Kingdom and had such a great welcome and hospitality like I’ve never seen before, and I look forward to coming back again. Thank you all for these special moments that will remain in my memory.” Always”.

Majed Al-Sorour, Vice-Chairman and CEO of the Saudi Golf and Saudi Golf Federation, commented on the success of the fourth edition of the tournament, saying: “In the beginning, I congratulate Harold Varner on his well-deserved victory in the Saudi International Championship. Those who participated and gave the tournament a list of names that are the strongest since its inception in 2019. Thanks are extended to our colleagues in the Asian Tour, to all success partners and to our brothers in the relevant government agencies for their cooperation and providing full support in all aspects.I do not forget, of course, the work team in the Saudi Golf Federation and Saudi Golf and their continuous efforts to make the championship appear In this professional form, which reflects the Kingdom’s ability to continue to host the largest sporting events in the best way.”

Al-Surour added: “We continue to push the wheel of developing and spreading golf in the Kingdom through all programs and initiatives, and we continue our commitment by taking advantage of all available opportunities to cooperate with partners from various local, regional and global agencies. We have set ourselves a series of ambitious goals that we seek to achieve by the year 2025 and we hope to be successful in translating it on the ground.”

Saudi Golf is working to improve men’s and women’s competitions to inspire its next generation to place the Kingdom in the ranks of the leading countries in this sport. It aims by hosting the largest global events, which are an essential part of the Kingdom’s golf strategy, to develop this sport and increase the number of interested and practitioners.

A group of the most prominent stars of the Masters Championship and the Ryder Cup participated in the Saudi International Championship, such as the defending champion in two versions, Dustin Johnson, Phil Mickelson, Sergio Garcia, Henrik Stensen, Lee Westwood, Shane Lowry, Tyrell Hutton and Louis Oustozen. In addition to the stars of the Saudi national team, Othman Al Mulla, Faisal Salhab and Saud Al Sharif. The tournament also featured 30 of the most famous names in the world of Asian golf, including: Scott Hind, Gavin Green, John Catlin, Shiv Kapoor, Wade Ormsby and Joo Hyung Kim.

The Saudi International Championship will return in its fifth edition next year, as it is part of the plans of the Saudi Golf Federation and Saudi Golf aimed at developing an integrated program to build and advance a national team, supervising a central system for classifying players, and providing excellent opportunities for players to participate in local and international tournaments with the aim of promoting interest in this sport. Upgrading the men’s and women’s competitions, inspiring the next generation, and increasing the number of participants throughout the Kingdom.

Tags: championship, in a, international, its copy, nickname, Saudi Arabia, the fourth, to golf, Varner, wins