Ukrainian Zinchenko dedicates the title to his country mired in war 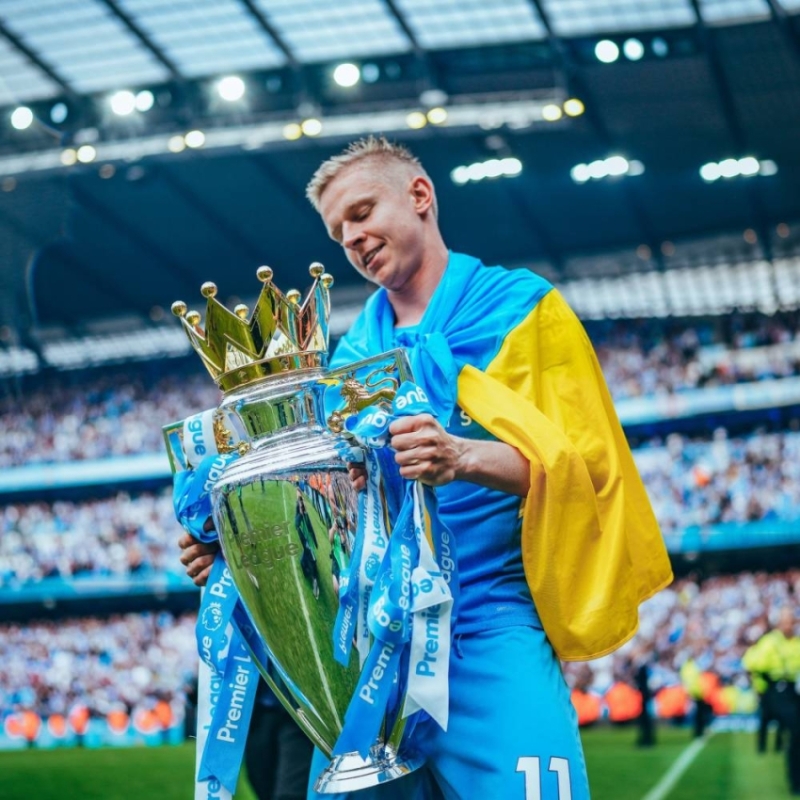 Ukrainian international defender Oleksandr Zinchenko gave the English Premier League title he won Sunday with his Manchester City team, to his country mired in war as a result of the Russian invasion.

City retained the Premier League title on Sunday after a dramatic victory at home to Aston Villa 3-2 after they were trailing with two clean goals, to end the season with only a point in front of Liverpool, who defeated Wolverhampton 3-1 after they were also behind.

Zinchenko played a role in the return of City to the meeting after entering at the beginning of the second half, which witnessed three goals for the team of Spanish coach Josep Guardiola within five minutes between the 76th and 81st minutes, including a double by the other German substitute Ilkay Gundogan. The Ukrainian full-back began to be very impressed after winning the title, and he wrapped the League Cup with the Ukrainian flag during the coronation celebrations.

Commenting on what he did, the 25-year-old said, “I am very proud that I am Ukrainian and I would like one day to be able to bring this title to Ukraine for all the Ukrainian people because they deserve it.”

Like all of his compatriots, the Russian invasion of Ukraine made its mark on Zinchenko, who took part in peaceful anti-war vigils in Manchester and sharply criticized the Russian invasion of his country. Zinchenko believed that helping City win the Premier League title for the fourth time in the last five seasons was the perfect way to return the favor to his coach Guardiola, his teammates and the club’s fans who have all supported him in these very difficult times.

“At some point, especially at the beginning (the beginning of the invasion), I didn’t think much about football because it was impossible to live in sync with what is happening in my country. But with all the support I had in the past and during this period, we succeeded,” he said. What can I say? Support means everything to me, honestly.”

He continued, “I want to die (sacrificing his life) for all this support because what people have given me, and what they have done for me during this most difficult period in my life, is very much appreciated and I will never forget this, never in my life.”

Tags: at, for his country, guide, sunken, the war, Title.., Ukrainian, Zinchenko