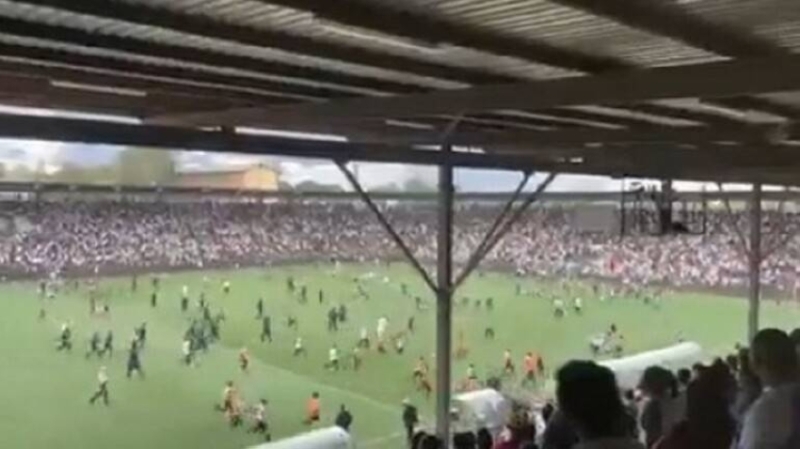 The Congolese TP Mazembe fans stormed the field after their team defeated its Egyptian guest, Pyramids, by two goals, today, Sunday, in the second leg of the quarter-finals of the African Confederation Cup.

After the Botswana referee, Joshua Bondo, whistled at the end of the match, TP Mazembe fans on the stands stormed the pitch in an attempt to attack the Pyramids players.

The last minutes of the match witnessed unfortunate events on the part of the Mazembe fans, as the Congolese fans clashed with the Pyramids players during a throw-in, after the fans threw empty bottles towards Abdullah Al-Saeed, the captain of the Egyptian team.

The Pyramids players demanded the referee provide them with protection, but he demanded the resumption of play because some players clashed with the fans, and they returned the bottles to the stands.

Ramadan Sobhi, the star of Pyramids, also entered into a sharp verbal argument with the referee before the end of the match.

The match witnessed many objections from the Pyramids players to the referee’s decisions.

The Pyramids team bid farewell to the championship after losing the two matches by a score of 2-0, after the end of the first leg in Cairo with a goalless draw.

Tags: and trying, assault, break into, masses, Mazembe, my players, On, pyramids, stadium