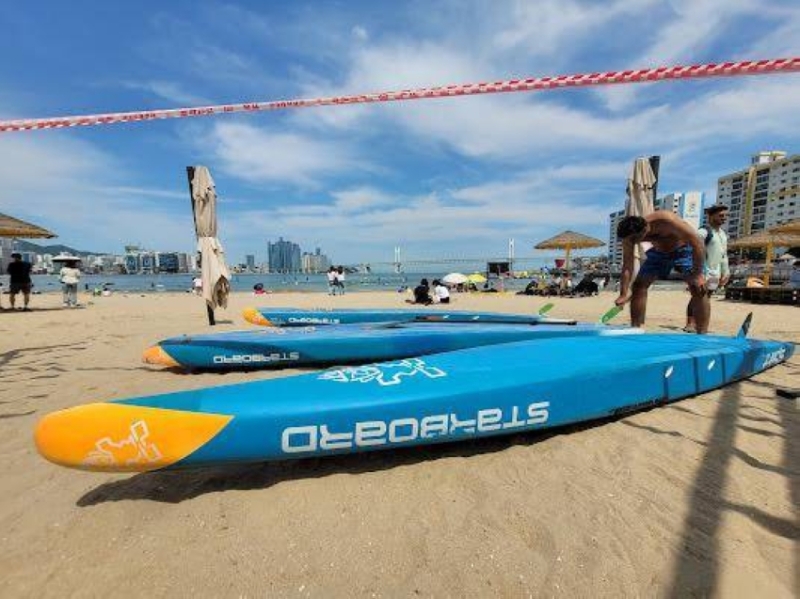 The Saudi surfing team has completed its preparations for its first international participation in the SUP World Tour Championships, whose first competition will be held in Busan, South Korea, on the 4th and 5th of this month, with the participation of a large number of players looking to win the championship, which offers a total prize money of more than two million. American dollar.

The Saudi team’s preparations witnessed the establishment of a training camp in Bahrain that started on the 25th of May and continued until its end, during which the players benefited from the directives of the national coach, Mohammed Al-Shibl, by training them on skateboards designated for competitions to give them a higher speed. The competitions that players are waiting for.

The participation of the Saudi team, which includes player Hassan Ajaj and player Sheikha Khayat in the competitions held in Korea, is of great importance, as it is the first official participation of Saudi players in international competitions, and it also comes less than a year after the establishment of the Saudi Surfing Federation as a first step in its journey Towards building a Saudi team present in the international scene and capable of representing the Kingdom in the biggest competitions.

The Saudi Surfing Federation was keen to involve the team in a special training program, in order to give the team’s players the opportunity to appear in the required form in international competitions, and get used to their rhythm, which was confirmed by coach Muhammad Al-Shibl, saying: “We are very happy with this camp, which helped us prepare Hassan and Sheikha to compete The competitions, and thankfully they are satisfied today with their level of physical preparation.” He added: “This camp is the first of its kind for our team, so it was of great importance at the current time and before the start of the competitions.”

On this occasion, the CEO of the Saudi Surfing Federation, Ms. Nouf Al-Nasser, expressed his happiness at the players’ readiness to compete in the first international competition, saying: “We are undoubtedly happy with this step. During the first four months of the federation’s launch journey, we succeeded in obtaining the accreditation of the International Federation in a record time, and today our team is entering its first international participation.”

Regarding the camp and the players’ readiness for the competitions, Al-Nasser said: “Our players are working on building their sports career, and we are aware of the difficulty of this type of competition. Therefore, we are very proud of Sheikha and Hassan and our national coach, Muhammad Al-Shibl, and we are confident in their abilities, and we will continue to work with them and support them to achieve goals and win championships.” .

The SUP World Standing Rowing Tour is the most valuable and most interactive round of this sport, and the Saudi team’s participation in it aims to prepare the players in preparation for their participation in the World Championships, which is expected to be held in Puerto Rico, USA, on the 28th of October.

Tags: Equip, for competitions, Globalism, his team, round, Saudi, the Union