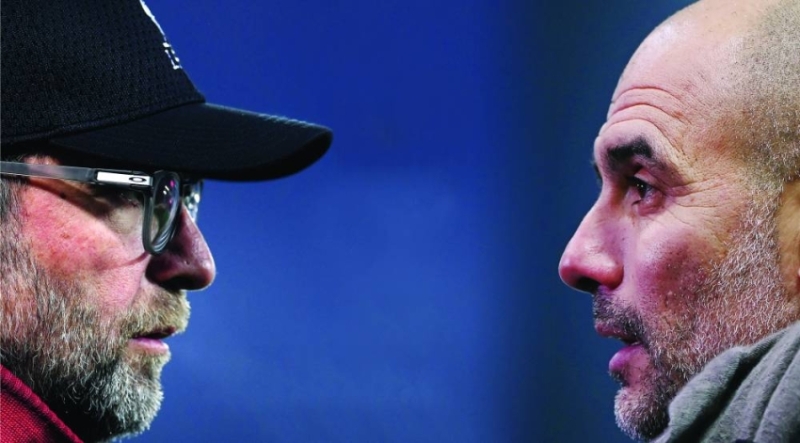 Attention will be focused on the Etihad Stadium, which will be the scene of the summit match between leaders Manchester City and the defending champion and runner-up Liverpool, who is one point away from him, today, Sunday, in the thirty-second stage of the English Premier League.

After Liverpool was 14 points behind City in one of the league stages, it managed to reduce the difference to just one point thanks to 10 consecutive victories.

The red team hopes to achieve a rare quartet, knowing that it began its quest by crowning the League Cup by defeating Chelsea on penalties in late February. It also plays the English Cup semi-final against Manchester City next week at Wembley Stadium, and has gone a long way towards reaching the semi-finals of the League The European Champions, with a victorious return from the Portuguese stronghold of Benfica, 3-1 in the first leg.

History stands on the side of Manchester City, because Liverpool failed to beat the latter at home since 2015.

Liverpool coach Jurgen Klopp realizes that his team cannot lose against City, but he also confirms that if his team is destined to win in Manchester, this does not mean that things have been decided with regard to the title. Very much, I don’t think anyone will say ‘It’s settled’, because of the quality of the opposing team.”

“We will face the best team in the world right now, this is the reality, but we will do our best against it.”

City coach Pep Guardiola stressed the difficulty of the confrontation, saying, “We will face Liverpool in the next match in the league. We know they will win almost all the remaining matches, and hopefully the next match (against us) will not be, but we will try to do the same.”

He continued, “When May arrives and you’re still in the race for the title, it means you’ve had a special season.

Being here means we have worked a lot and we have done it every season.”

In general, the remaining matches for Manchester City seem easier on paper than Liverpool, as Citizens only face one team among the top ten is West Ham in the remaining stages, while Liverpool meets with Manchester United, Tottenham and Wolverhampton.