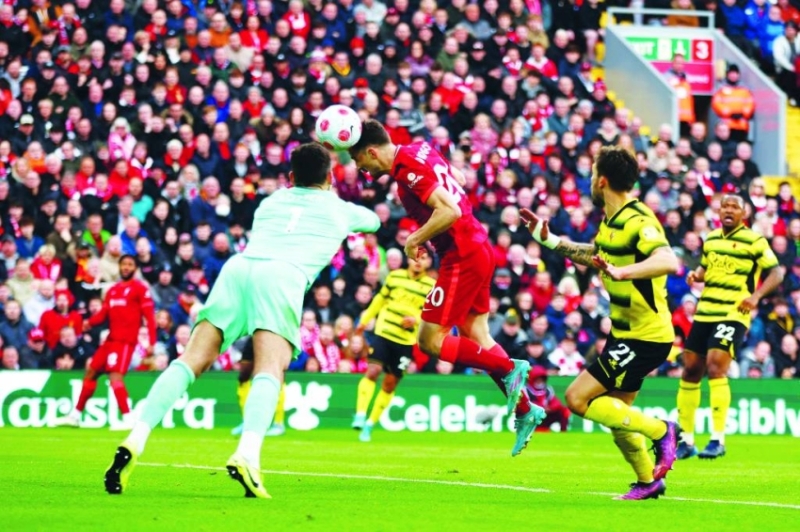 Liverpool dreaming with a historic quartet and Manchester City, chasing after the first title in the Champions League in football, will start two crucial weeks, when the second hosts Atletico Madrid, today, Tuesday, in the first leg of the quarter-finals of the continental competition, while Mohamed Salah and his companions visit Benfica.

On Sunday, the Premier League will witness the climax of the match between the defending champions and leaders City with an orphan point difference between Liverpool, and then they meet on April 16 in the semi-finals of the local cup competition at Wembley Stadium. In theory, the two teams are likely to meet in the Champions League final scheduled in Paris on May 28.

The results of the two teams in the Champions League may play a role in determining their remaining path during the domestic season.

Liverpool has better chances on paper in the Champions League, as it faces the winner between Bayern Munich and Villarreal in the event of overcoming Benfica, while the men of Spanish coach Josep Guardiola await their compatriot Chelsea, the title holder, or Real Madrid, the leader of the Spanish league and record holder in the continental competition (13), In the event that Atlético de Madrid stubbornly skipped them.

And the German coach of Liverpool, Jurgen Klopp, had announced that the Premier League was the “most important” award for his team, which was crowned earlier in the League Cup.

But City does not agree with him, given his dominance in the English Premier League in recent years, and his approach to continental glory when he lost against Chelsea, who was far behind him in the local league.

Guardiola will face a very stubborn opponent represented by the Argentine coach, Diego Simeone, who is third in the League after winning 6 times in a row. In the few direct confrontations between them, Guardiola leads the former midfielder 2-1, knowing that City and Atletico have not met previously.

Crazy levels Liverpool, which trailed by 14 points from City last January, is living a wonderful period, after winning ten matches in a row in the league, to bring back memories of its crazy match with City for the title of 2018-2019 season, which ended in favor of the latter by a point difference (98-97). He is looking for a historic quartet (League, Cup, League Cup and Champions League) or to follow in the footsteps of Manchester United, the only English club to win the Champions League, League and Cup treble in the 1999 season. After his contribution to the exclusion of Barcelona, ​​Spain and Ajax Amsterdam, the Netherlands.

The Portuguese team is looking to reach the semi-finals for the first time since 1990, when it reached the final under the guidance of Swedish coach Sven-Goran Eriksson. At that time, he lost to AC Milan and failed to lift the title for the third time in its history after 1961 and 1962.

But in a season of European brilliance and reaching the quarter-finals for the first time since 2016, the Portuguese capital team experienced a turbulent local season, after the dismissal of its coach, Jorge Jesus, in December, after a heavy loss against local rivals Porto, by 3-0, and achieving only 7 victories in 15 league matches. .