The Mélenchon-Zemmour debate, a great pugilistic show with immigration as a leitmotif 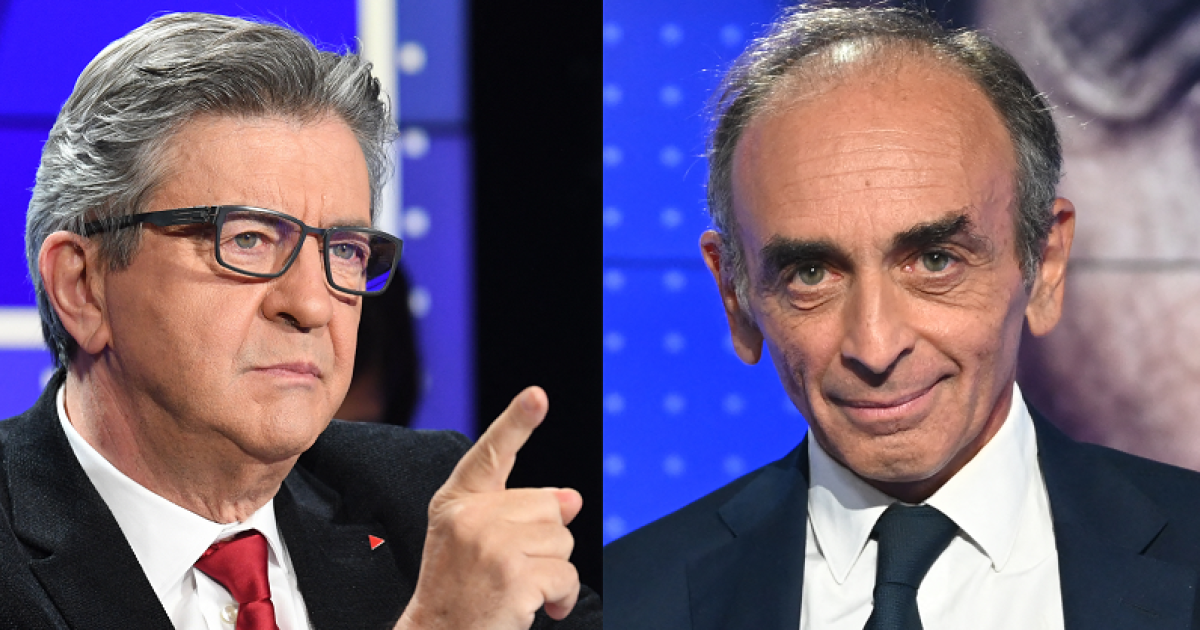 It was the “match of the century”, “The Rumble in the Jungle”, mounted in sauce at the level of the biggest sporting events by BFMTV and the supporters of both camps, with great blows of supporterism, teasers with epic music and “Trash talk” on social networks. Eric Zemmour and Jean-Luc Mélenchon therefore faced each other this Thursday evening September 23 on BFMTV, thirty-two years after the Tapie-Le Pen debate, the first occurrence of a major televised debate in prime time featuring a far-right political figure.

Mélenchon or Zemmour? 69% of the French consider them incapable of governing

And as at the time, the decibels flew between the two swordsmen, divided between mutual disgust and a manifest pleasure in crossing swords. “Like me, you won’t want it to be a match: neither cockfight nor worldly perfidy”, begins Mélenchon. Each accusing each other of being one ” danger ” for France, the two adversaries, however, for nearly two hours and ten, maintained a level of animosity which did not spare the two unfortunate journalists responsible for arbitrating the debate. “I am here to debate with Mr. Mélenchon, not to answer your questions”, repeatedly sweeps Zemmour, who ostensibly takes out his cell phone during the obligatory fact-checking session. “You see, there is more disagreeable than me! “ laughs Mélenchon.

Suddenly, the French political landscape has shrunk, there no longer seems to be anything between the nationalist editorialist and the rebellious leader, nor Emmanuel Macron whose name has only been mentioned two or three times, nor Marine Le Pen, completely disappeared from people’s minds for an evening: Zemmour and Mélenchon seem to animate, fiercely, the debate between two turns of a parallel reality under high tension. From the start, a choice endorsed by the three parties, the debate focuses on immigration, Islam and insecurity, before moving into a second part on the economy, social and ecology: everyone will play a half at home.

Eric Zemmour and 2022: the double-dip strategy

“I am French, but it is not the same thing”

From the first minutes, Zemmour recounts his migration statistics, a “Avalanche of figures to create a nightmare atmosphere”, in the words of Mélenchon. “I’m not going to let myself walk from one figure to another”, evacuates the rebellious leader, who will oppose the assimilation of Zemmour his concept, inspired by the Martinican poet Edouard Glissant, of “Creolization”, according to which “Human beings come together and form something in common”.

“France is this singular mishmash, unique in the world, which culminated in the extraordinary idea of ​​human rights. […] What fertilized France is this immense idea of ​​the human being, creator of his own history. “

“We’re going to go straight”, Zemmour replies: “Creolize, I don’t know what that means. It is a kind of pseudo-poetic chimera to once again extol globalization and its great merits. “

Who is Sarah Knafo, the enarque in the shadow of Eric Zemmour?

Denouncing Islam, “Not compatible with France”, the journalist from the “Figaro” will not wait long before resorting to his cute sin, the onomastic argument: the question of “French first names” comes back repeatedly throughout the debate, giving rise to surreal exchanges as when Eric Zemmour mentions the low number of “French names” on the detainee lists. “A French name is a name that is worn by a French! ” Mélenchon replies tit for tat.

Zemmour: “Me for example, I have a name that is not originally French”
Mélenchon: “And how are you counted if we put you in jail?” “
Zemmour: “I am counted as a non-French name. “
Mélenchon: “But yet you are French! “
Zemmour: “I’m French, but it’s not the same thing. “

Of Berber origin, the future far-right candidate refers Mélenchon to his Spanish name and to his birth in Morocco: “You are the product of my idea of ​​France […], of French assimilation, and you deny it today! “

Denouncing a vision “Stunted” of the world, Jean-Luc Mélenchon imagines “Zemmouristan” and ensures that this country exists:

“It is a country where women are demeaned, where there is the death penalty, where homosexuals are punished. […] It’s called Saudi Arabia ”.

Uneasy about the climate issue

The facilitators must reframe the debates, because we could still debate Islam at half past midnight, and continue with economic subjects. To the optimism of Mélenchon, who proposes an increase in the minimum wage of 16% because “There is money”, Zemmour opposes his declination: “I don’t believe we are such a rich country. France, on the contrary, is in the process of impoverishment, decline, third worldization. ” In question ? China’s entry into the WTO twenty years ago, and “A welfare state that has become obese” : for only argument, Zemmour quotes the analysis of the controversial magistrate Charles Prats, which evokes the staggering figure of 50 billion euros per year of social fraud (against 1 billion euros of fraud detected, according to the Court of Auditors).

Even when the debate turns to the environment, the subject of migration is never far away. Is this a priority for Eric Zemmour? “I said my priority: the fight against immigration”, he repeats to the attention of the most distracted viewers. Therefore forced to talk about global warming, he shows unusual humility:

“On the environment, there is apparently, I am not a specialist, if I am to believe the scientists, well many scientists because there are debates, there is an increase of CO2 in the atmosphere. I’m not an expert, neither are you. ““It’s this time or never”: Mélenchon displays his resolution for his campaign entry

For Zemmour, France is already doing extremely well on ecological issues and should “Congratulate” and do “Cocoricos every day”, in particular thanks to its low carbon nuclear industry. “To date, there has never been a nuclear accident in France”, he even wrongly argues – two level 4 nuclear accidents occurred in France, in Loir-et-Cher in 1969 and 1980. “We are making progress, we are burying the waste more and more deeply”, he marvels before specifying “All the evil” let him think of wind turbines. “You look at nuclear power with the eyes of the Sixties, you are dazzled”, laughs Mélenchon.

“Maybe immigrants, what do you think? “

As for the growing desertion of the ballot boxes by the French, how can we understand it? “The massive abstention, which has been growing slowly for twenty years, is coming…” “Maybe immigrants, what do you think? ” Mélenchon cut, hilarious. “Do not laugh at the existential anguish of the French people, M. Mélenchon”, Zemmour replies, not amused at all. “You are slightly scratched, as a record”, points to the rebellious deputy, who accuses his opponent of “Push people to civil war”.

“It touches on all subjects and it haunts the French […] If we continue like this, the France of 2050 will be a Lebanon on a large scale, the French people will have gradually been replaced by another people ”, believes the chronicler, according to whom the French feel “Expropriated from their own country”. Does he embody their candidate? “I don’t know if it’s me, but the candidate is missing to embody that. We’ll see. You allow me to choose my moment “, Zemmour again evades… even if the suspense on this subject is less and less intense.