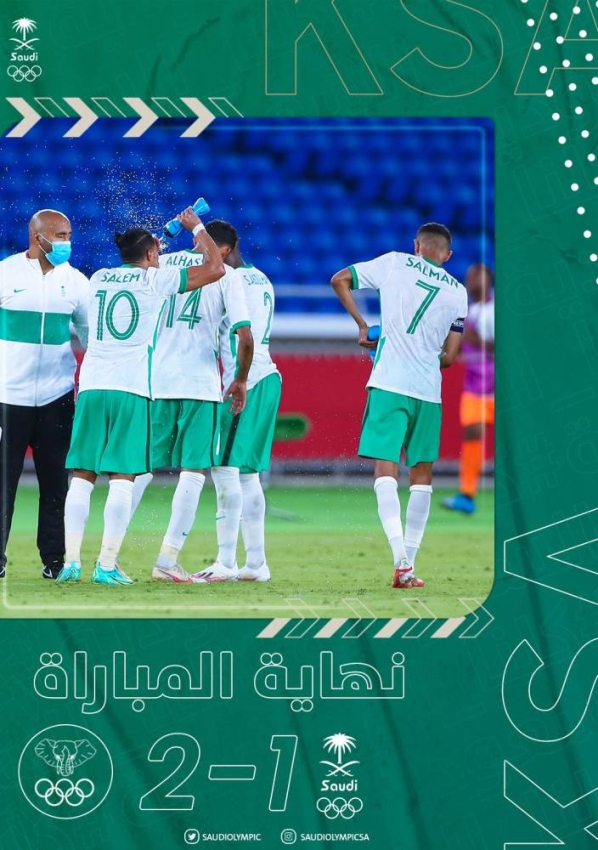 The Saudi national team lost to its counterpart Ivory Coast 2-1, in the opening matches of the Tokyo Olympics, in the confrontation hosted by Nissan Stadium, in the first stage of the fourth group football competition.

The team presented a distinguished performance, especially in the first half, where Ayman Yahya had an early opportunity when he hit a powerful ball from outside the penalty area, but it hit defender Eric Bailly. The team continued its attack and a dangerous opportunity was given to striker Abdullah Al-Hamdan, who received a pass from his colleague Yasser Al-Shahrani, but he failed to turn it into the net.

And in the 39th minute, Ivory Coast managed to open the scoring through Saudi defender Abdulelah Al-Omari, who crossed Kwame’s cross by mistake into the net of his goalkeeper Mohammed Al-Rubaie. Al-Akhdar responded quickly, specifically at the 44th minute, when Salem Al-Dosari hit a powerful ball from outside the penalty area to land in the net of goalkeeper Eliezer Tabi.

In the second half, the preference for the Ivory Coast team tended, whose player Frank Kessie managed to score the second goal at the 65th minute when he received a pass from his colleague Amade Traore to face the goal and hit the ball past goalkeeper Mohamed Al-Rubaie. Al-Akhdar tried to return quickly, and Salem Al-Dosari had a dangerous opportunity, who received a pass inside the penalty area from his colleague Ayman Al-Khalif to hit the ball strong, but it hit the crossbar. Al-Akhdar intensified its attack and Khaled Al-Ghannam almost scored the equalizer after receiving a pass in front of the goal from his colleague Saud Abdel Hamid, but he failed to convert it into the net. With this result, Ivory Coast temporarily topped the group standings with 3 points, and awaits the second confrontation in the group that will bring Brazil against Germany.