“The Chef”: at the heart of a boiling volcano 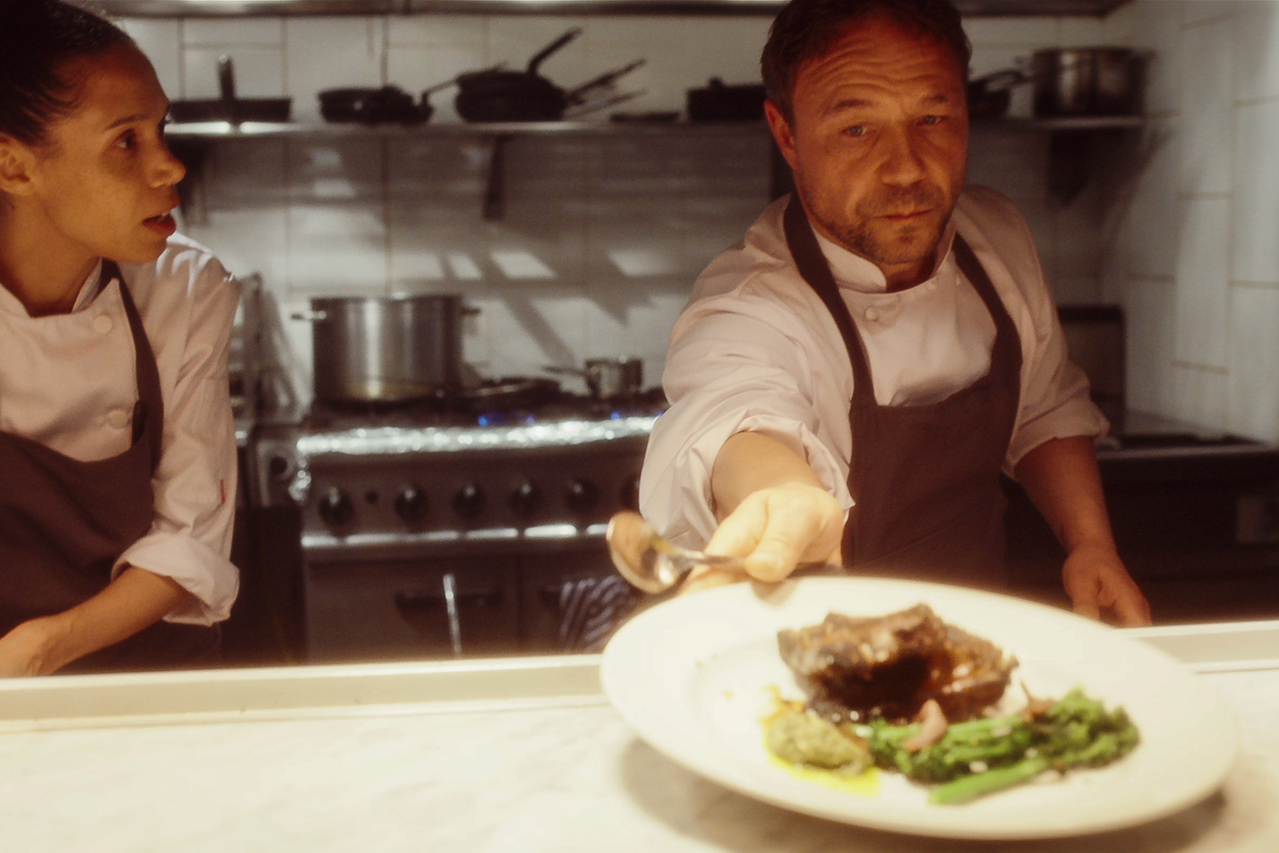 Magic Friday. The Friday before Christmas is the busiest night in London restaurants in Britain. It’s the day chosen by a fastidious food standards inspector to check that everything is in order in the establishment of Andy Jones, a starred chef at the head of a very renowned gastronomic restaurant. He looks for the little beast, finds it, lectures the leader for breaches of the rules, and sanctions him, demanding that he make amends as soon as possible and raise the bar.

This is only the appetizer, the beginning of a tension that will rise crescendo, in the scullery, the kitchen open to the room, the restaurant, punctuated by the arrival of customers with special requirements. At the center of this volcano whose temperature continues to climb and eruptive episodes follow one another, the omnipresent starred chef, played by the excellent Stephen Graham. He must control everything as the lava overflows, overwhelmed by a progressive state of panic which he tries to suppress and conceal by indulging, uncomfortably, in a series of disastrous addictions.

A high-flying merry-go-round over a precipice

To make matters worse, here comes one of the stars of food critic who officiates on television, flanked by another dreaded critic. The shadow of a dispute with the chief hovers. Added spice, a band of clumsy influencers shows up, ready to knock out the reputation of the establishment. They are not the only customers: a racist and authoritarian father humiliates the waitresses; a young couple shares their food intolerances. At the bar, cocktail attendants live their own lives. To orchestrate the ballet in the hall, the manager, under her assurance of facade not very comfortable in her duties, tries to put on a good face.

But the bubbling heart of the volcano is held in the kitchen, precipitated by all the tensions, between the emergencies of a service that must remain impeccable, controlled by a hardened steel sous-chef, the confusing unexpected events, the staff not always reliable, the inevitable hazards and the flaws of each. The accumulation of imperfections unbalances this high-flying merry-go-round suspended above a precipice…

Actor turned director, Philip Barantini worked for twelve years in various restaurants, going from clerk to chef. The material of his dramatic comedy, with accents of social thriller, is inspired by what he lived. Rivalries, jealousies, settling of scores, more or less contained violence, circumstantial solidarity, permanent adjustments, cascading psychodramas. Every evening, through this show on the razor’s edge, the chef (heavily in debt), sheltered from nothing, stakes his reputation and his survival, counting only on a brigade with various skills, in an atmosphere of low stress. conducive to serenity.

The realistic metaphor of a supercharged era

The Chief looks at himself, clinging to his chair, as one follows the hazardous progress of a tightrope walker, watching, breathless, the slightest misstep, the fatal swing. On this tenuous thread, Philip Barantini has opted for the most perilous of configurations: a sequence shot of an hour and a half, without cut, with around thirty characters twirling and colliding in this camera. The chief operator follows the action in real time (preparation of orders and dishes, immediate service, mishaps of all kinds, accidents).

We stop breathing, carried away by the double movement of the plot and that of the risks in front of the objective, with the constant fear of the grain of sand which would stop this beautiful machine. Also struck by a feeling of admiration for the straight line acting of the actors (Stephen Graham, Vinette Robinson, Jason Flemyng and the entire cast), the netless virtuosity of the director of photography (Matt Lewis) and the absolute mastery of this astonishing exercise in style that is not in vain.

Beneath the trappings, the human adventure of a heterogeneous party, dark power relations and the sinking of the ordinary overload are played out. The Chief is also to be seen as the realistic metaphor of a supercharged era whose restaurant in this film, a symbolic arena, serves as a staggering revealer.

1996. Debuts as an actor in DreamTeam, a football drama.

2019. Chernobyl, series about the explosion of the Ukrainian nuclear power plant.

2019. Boiling Point, short film, prelude to what will become The Chef.