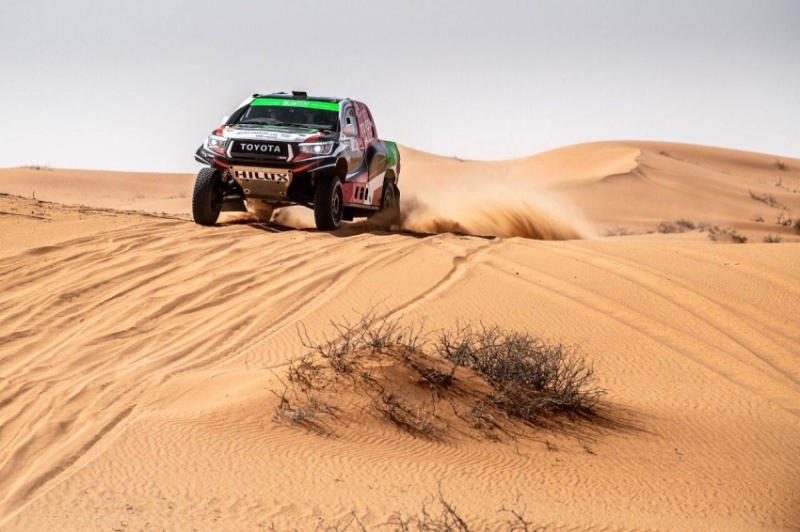 The Hail International Rally has attracted a large number of participants in its international and national editions, all of whom intend to participate in the final (sixth) round of the FIA ​​World Cup for Cross Country Rally 2021, which will be held in north central Saudi Arabia in The period is between December 6-11, 2021.

The Saudi Automobile and Motorcycle Federation is supervising the organization of the rally, and its organizers were able to attract 29 cars in the “FIA” international classification, four cars of the “T1 +” category with 2022 specifications, 27 cars in the national classification, and 29 participants in the two motorcycle categories. The regular and four-wheeled “Quads”, along with three drivers in the truck category, note that a large number of participants are participating in the rally in preparation for the biggest entitlement represented by the Dakar Rally 2022, which will be held next January in the Kingdom of Saudi Arabia, and whose competitive stages will begin from Hail.

The 2021 Hail International Rally will consist of four special stages that pass through the Nafud Al Kabeer desert, the results of which will be decisive for this season’s drivers’ championship in the World Cup for Cross Country Rally. The most prominent participant is the Qatari driver Nasser bin Saleh Al-Attiyah, who is striving to achieve his fifth title, as he scored four titles (2008, 2015, 2016 and 2017), and he needs to finish the rally within the points to guarantee the world title.

The Qatari will compete in the Toyota Hilux T1 car, and his main competitor will be his Argentine teammate Lucio Alvarez, who needs to win the rally title to snatch the world title from his colleague.

The Saudi driver, Yazid bin Muhammad Al-Rajhi, will also participate in the rally, in a Toyota “Hilux”, as he aspires to win it on his land and among his fans, knowing that he won the title of this rally several times previously. It is worth mentioning that Yazid has already won the World Cup for Short Desert Rally From the FIA ​​Via Baja at the Portalegre 500 rally in Portugal, last month.

It is worth noting that the Toyota factory team will involve three cars in the rally, while its direct competitor will involve the X Raid team with four Mini cars, along with strong names, including the Czech Miroslav Zapletal in the Ford “F150”, and the Russian Vladimir Vasiliev in the “B” car. BMW “X5” model.

The rally will include a separate class of cars with specifications for the 2022 season, known as “T1+”, Czech driver Martin Prokop will participate in a Ford car developed according to the new specifications, and Toyota will share two “Hilux T1+” cars with the French drivers Ronan Chabo and Argentine Juan Cruz Yacobini. Swedish driver Sebastian Ericsson will test a new T3 Can-Am.

The list of participants in the categories of regular motorcycles and quads includes Gulf riders, most of whom are from Saudi Arabia and the United Arab Emirates, and participate in the international and local classifications, most notably the Saudis Abdul Majeed Al Khulaifi and Sultan Al Masoud, who hope to win on their land.

The trucks category attracted three participants, the Saudi driver Ibrahim Al-Muhanna, the familiar name in this category for years, and he is participating, as usual, in the Mercedes “Unimog” truck, along with the experienced Japanese drivers, Teruhino Sugawara in the Hino truck, and the French, Theo Calve, in the Tatra truck.

As mentioned above, the 2021 Hail International Rally will consist of four special stages, with a total distance of 1,753 km, of which 969 km are timed stages.