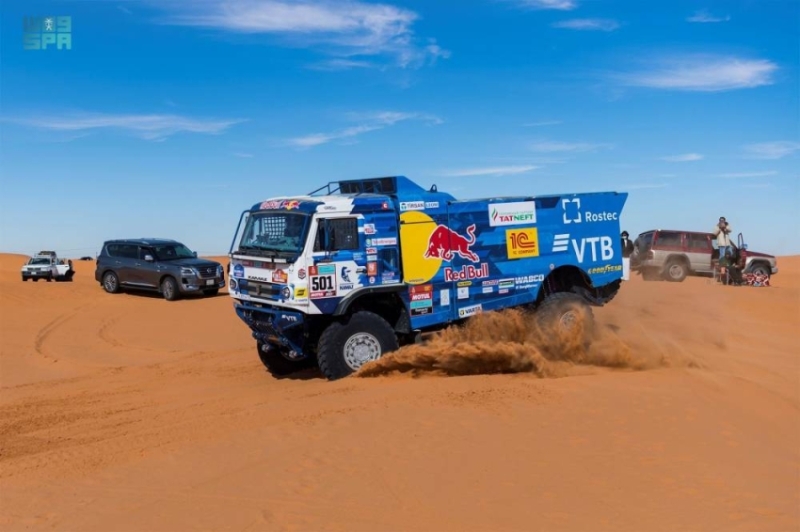 In terms of racing, Argentine Orlando Terranova, driver of the BRX team, was able to take the lead in this stage of the car category, ahead of Sweden’s Matthias Ekström, driver of the “Audi” team, who ranked second. In third place.

At the end of this stage, Qatar’s Nasser Al-Attiyah, the Toyota team driver, managed to maintain the lead in the general classification, despite ranking tenth in this stage, while Saudi Yazid Al-Rajhi advanced to second place, and French Sebastien Loeb fell to third place in the standings.

In the truck category, the KAMAZ team continued to dominate all stages of this edition of the rally, while at this stage three of its drivers arrived first, and the Russian Andrey Karginov was the first to reach the finish line in this round, followed by his colleague Dmitriy Stonikov in second place. , followed by their compatriot Eduard Nikolaev in third place.

The organizers of the Saudi Dakar Rally 2022 had announced the cessation of competitions in the categories of motorcycles and quads at this stage in the first neutral zone “after 101 km from the sixth special stage”, due to the deterioration of the tracks’ condition, due to the passage of cars, light desert vehicles and trucks on them. In the previous stage, in light of heavy rain in the past period, which made the path unusable for bicycles.

Australian Gasgas rider Daniel Sanders took the lead in the sixth stage of the motorcycle category at the moment the competition stopped, ahead of his English teammate Sam Sunderland, with a lead of two minutes and 26 seconds, while Red Bull KTM rider Matthias Walkner was in the center The third, a difference of two minutes and 36 seconds, and in the quads category, the Russian Cher Marie rider Alexander Maximov won the stage, only 9 seconds ahead of the French rider Alexandre Giroud, who came in second place, and the French cyclist Sebastien Saadi came in the third place.

It is noteworthy that tomorrow will be a rest for the participants to arrange their papers, before entering the seventh stage competitions, which will start next Sunday, from Riyadh towards Dawadmi, for a total distance of 700 km, including 401 km for the special stage subject to timing.