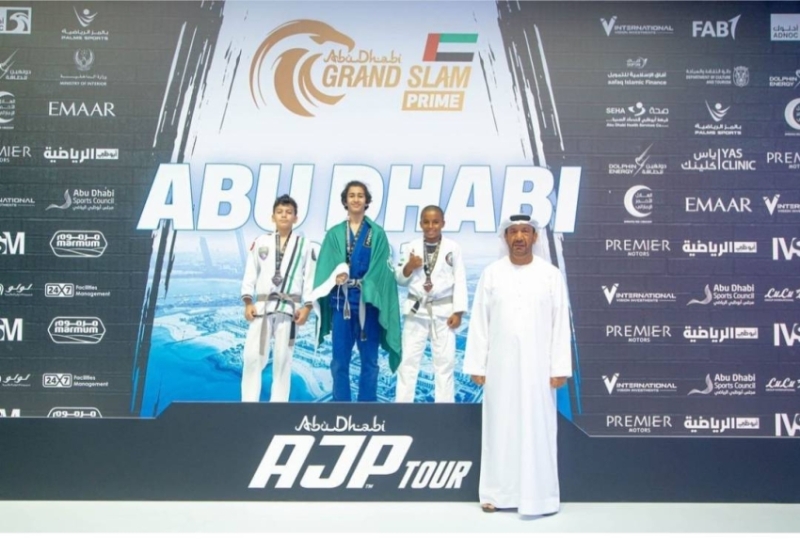 The 12-year-old Saudi player, Abdul Rahman Abdullah Fakih (gray belt) from the Arena Academy “BBG” won the gold medal for the junior category, weight 55 kg, in the 12th edition of the Abu Dhabi World Grand Slam Jiu-Jitsu Championship, which was recently concluded in Zayed Sports City in the capital, Abu Dhabi, over the course of three days. Days with the participation of a selection of top ranked players, game legends, professors and juniors at the global level.

The player Abdul Rahman Fakih is one of the promising elite players, especially after the good levels that he presented locally and regionally. The player expressed his happiness with this unique achievement for him personally and for raising the name of the Kingdom in this international forum.

After ascending to the podium, raising the Saudi flag, he added: “I dedicate this achievement to the dear homeland and thank the support I received from my family and friends, and this support was an encouragement to give my best, and on this occasion I dedicate this achievement to them and promise them more in the future. I will be keen to participate in the upcoming tournaments and interact with Strong players from different countries.

For his part, the father of the player, Abdullah Fakih, did not hide his feeling of pride and happiness for his son’s winning of the gold medal for the junior category, dedicating this victory to the Kingdom of Saudi Arabia. In the name of the country.”