Roma crowned the first edition of the European Conference League 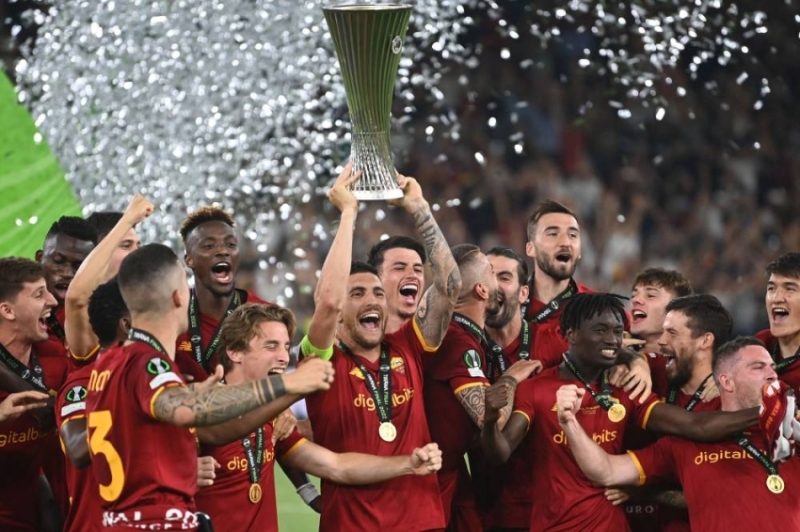 The Italian club AS Roma won its first continental title in the first edition of the “Conference League”, the third most important European championship in football, thanks to a goal scored by Nicolo Zaniolo in the final match that was held in the Albanian capital Tirana.

It is the fifth European title for Mourinho, who has previously won two Champions League titles with Porto (2004) and Inter (2010) and two in the European League with Porto (2003) and Manchester United (2017).

Roma, who won their last title in 2008 in the Italian Cup, were slapped in the current version, losing to Norway’s Bodo Glimt 1-6 in the group stage, but they regained the winning tone and reached the final.

The fans of the capital team are aware of the importance of winning a first continental title, especially after the failure of solutions among the top four in the Italian League and qualifying for the Champions League, so it was satisfied with the sixth solution and the reservation of the Europa League ticket.

Historically, Rome lost two continental finals, in the Champions Cup in 1984 against Liverpool by penalty shootouts and the European Union Cup in 1991 against its compatriot Inter, if we exclude his crowning of the Cities and Exhibitions Cup (later turned into the European Union Cup) in 1961 at the expense of Birmingham, England.

Mourinho (59 years) has not lost any continental final (except for the European Super three times).

Thus, this season, Roma compensated for the disastrous performance of the “Serie A” clubs, which failed to reach the quarter-finals of the Champions League, and the Blue team failed for the second time in a row to reach the World Cup finals, despite winning the title of the last edition of the European Cup.

Off the field confrontation

The confrontation began outside the stadium before the match began inside, as violent confrontations erupted in Tirana the night before, as Feyenoord fans attacked a local man and injured ten policemen, according to the authorities, who said Wednesday that they had sent dozens of fans of the Italian capital club back to their country.

Calm returned to the streets of the Albanian capital after the violence, which resulted in the injury of 19 policemen and 10 other people, including five Albanians, three Italians and two Dutch nationals, who were taken to hospital for treatment, Deputy National Police Chief Albert Dervishai said in a press conference.

A policeman was stabbed while eight Feyenoord fans were arrested for hitting an Albanian man on the chair because of his support for Roma, and he had to be taken to hospital.

On Tuesday evening, a group of about 200 Feyenoord fans clashed with the police as they tried to reach the area where the Roma fans were, some of whom assaulted the security men with sticks and stones.

Fans of the two teams clashed in at least three locations in Tirana, an AFP correspondent saw.

Returning to the field, Roma received an early blow in the match, with the Armenian Henrikh Mkhitaryan falling to the ground due to an injury, to leave in the 17th minute and replace the Portuguese Sergio Oliveira.

Mourinho had decided to include Mkhitaryan in the match, after he was absent for about a month due to injury, and he only participated in one training session before the final.

The fruitless sparring was the title of the first half hour of the match with building attacks without reaching the goal and forming a danger from the two teams.

However, the 32nd minute turned the ball in favor of Roma, when defender Gianluca Mancini played a falling pass behind the Dutch defense lines, which Zaniolo was waiting for, so he received it on his chest and quietly cornered it in the goal over Feyenoord goalkeeper Justin Bailo.

According to the “Opta” network of sports statistics, Zaniolo, at the age of 22 years and 327 days, became the youngest player to score a goal in a European Championship final since Alessandro Del Piero (22 years and 200 days) with Juventus against Borussia Dortmund in the Champions League final in May. 1997.

After the match, Zaniolo said, “It was a great struggle, but I’m really happy. One of my dreams was to win a title with Roma, and now I’ve achieved it.”

Feyenoord tried to absorb the shock of the goal and return to the match before the end of the first half.

In the 41st minute, Turkish Orkun Kokçu fired a missile, which had Roma goalkeeper Rui Patricio on the lookout.

The Dutch team entered the second half with greater determination, and through the pressing attack, there was an opportunity to equalize after a ball from Mancini rebounded by mistake and hit the left post, to reach Gus Till, who fired a powerful ball that was blocked by Patricio (47).

Two minutes later, a missile shot came from Terrell Malacia, Patricio starred in stopping it, hitting the corner of the crossbar and the left post and turning into a corner.

The Englishman, Tammy Abraham, missed the opportunity to double the score for Rome when he was alone in the goal before he stopped suddenly, thinking that the referee would charge him with a mistake after tightening one of the defenders (51).

The give and take between the two teams continued in the remainder of the match, with five minutes counted by the referee as time in lieu of lost time, and the match ended with Roma winning.