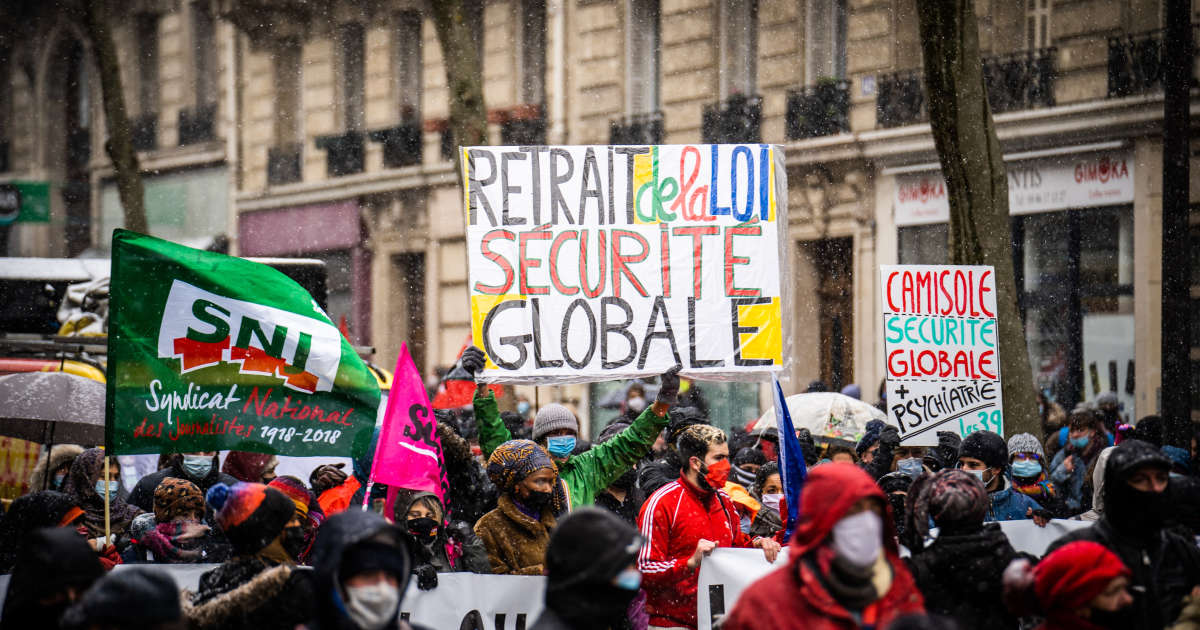 They do not disarm: the opponents of the bill “Global security”, which penalizes in particular the malicious dissemination of images of police officers, demonstrated again Saturday in Paris and in several cities of the country.

In the capital, a procession of a few thousand people marched in a snowy rain towards the Place de la Bastille, behind a banner demanding the withdrawal of this text, chanting “Police everywhere justice nowhere” and “State of emergency Police state, we will not be prevented from demonstrating!” “.

The police intervened to prevent the holding of an undeclared rave party near the event, according to the Paris police headquarters, which has deployed an important device to strictly supervise the event. Organizers were fined and had sound equipment confiscated, according to the same source.

In several cities “Chirps” from the movement of “Free parties” have indeed decided to join the movement “For the right to culture” and against the “Disproportionate repression” launched after the rave of Lieuron, in Ille-et-Vilaine, which brought together 2,400 people at the New Year.

After the demonstration against the law “global security”, story of 48 hours of immediate appearances

They were particularly numerous at the start of the demonstration in Nantes behind banners such as “We are all rave organizers” or “The murderous state: lives, cultures, freedoms”.

In Lille too, the parade had an air of technoparade, under heavy falling snow.

In the procession Lucile Fremaux, supervisor in a high school, judges that“With the environment which is hyper anxiety-provoking and the laws that the government leaves us, it becomes unlivable”.

Despite the health crisis, here are the reforms Emmanuel Macron intends to carry out in 2021

Thimotée Carpentier, educator, complains that there is “More and more control of people, not just delinquents, everyone can be stuck”.

François, yellow vest on his back, in the Parisian demonstration, reports for his part:

“I am demonstrating against this regime which is showing itself to be more and more radical. It’s a strange dictatorship, we wonder where we are going with this security law … If this is the country of human rights and freedom, I am ashamed to be French! “

Nearly 80 gatherings “For the right to information, against police violence, for the freedom to demonstrate and against mass surveillance” were planned in the country.

These “Freedom marches” take place at the call of the coordination of associations and unions mobilized against this text, which restricts in particular the dissemination of images of the police.

Despite “An unprecedented mobilization for the defense of freedoms, the government (us) opposed an end of inadmissibility”, regrets, in its call to demonstrate, the coordination.

This brings together associations such as the Human Rights League and Amnesty, as well as many unions and associations, including journalists and directors.

The bill, already passed at first reading in the National Assembly, must be examined in March in the Senate.

“The stakes are (…) major. They affect the very respect for the rule of law ” and control of the authorities “By citizens, Parliament, justice and the press”, underline the associations, which add that “Population surveillance measures must remain the exception”.

They still require the withdrawal of several provisions, starting with article 24, which penalizes the malicious dissemination of images of members of the police.

The collective, which asks to be received by President Emmanuel Macron, also targets articles 21 and 22 on the use of pedestrian cameras and drones by the police, and of the “New national law enforcement plan” (SNMO), regularly invoked by the police to limit media coverage of the demonstrations.

The bill has been strongly criticized in France by the Defender of Rights and the National Consultative Commission on Human Rights, and abroad by special rapporteurs of the United Nations and the Commissioner for Human Rights of the Council. from Europe.

Mobilization against the proposed law “Global security”, launched on November 17, gave rise to several days of demonstrations, often joined by “Yellow vests”. The largest, on November 28, brought together 500,000 people in the country according to the coordination, 133,000 according to the government.

Several, in Paris in particular, were punctuated by clashes with the police.