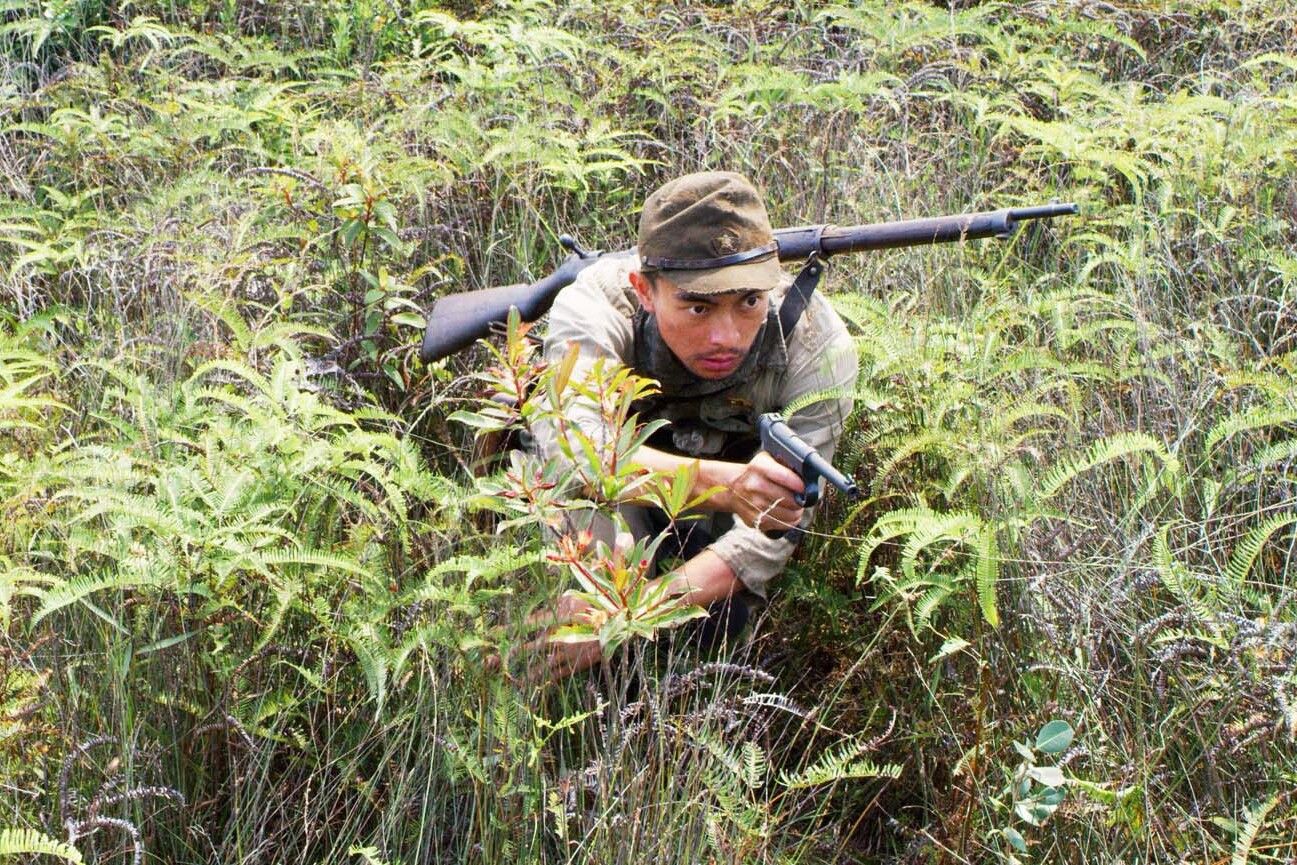 After the surrender of Japan in August 1945, a handful of Imperial Army soldiers scattered across Pacific islands refused to believe in defeat and continued to fight an imaginary enemy, sometimes for decades. These “remaining” soldiers, as the expression goes, had already inspired a unique film for Josef von Sternberg, Fever on Anatahan released in 1953. Arthur Harari, for his part, attached himself to the story of the most famous of them, Hiroo Onoda to build an impressive film, both by its scale and its simplicity, but also by the attention that ‘he brings to his hero whose sacrifice and abnegation border on vertigo.

This officer, trained in guerrilla techniques, was sent in December 1944 to the island of Lubang in the Philippines with the order to delay the American landing until the arrival of Japanese troops. When the island was recaptured in 1945, Onoda refused to surrender and took refuge in the mountain with three other soldiers to organize the resistance. He remained there for nearly 30 years, refusing to believe in defeat and interpreting as a ruse any attempt to convince him that the war was over. Found in 1974 by a Japanese student, he will only agree to surrender his arms to his hierarchical superior, Major Taniguchi, who has since become a peaceful bookseller.

An immersion in the psyche of his hero

As an avid reader of Conrad and then of Stevenson, Arthur Harari had long dreamed of making an adventure film. He immediately felt the potential he could draw from this story. The more so as the character of Onoda with his refusal of reality, his romantic relationship to the world and a form of idealism or intransigence, it is according to, resonated deeply in him. “I have always dreamed of parallel lives. Not being in reality is a form of resistance, of a utopian position ”, He explained to us before the screening of his film in Cannes at the opening of Un Certain Regard.

After Black Diamond, Unclassifiable thriller taking place in the middle of the diamond dealers in Antwerp, this atypical director therefore takes us into the Philippine jungle and surprises with a film far removed from the canons of the usual French production. Shot in Cambodia with Japanese actors, Onoda is as much an adventure film as it is an immersion in the psyche of its hero. Because very quickly time freezes for Onoda and his comrades. A first part recounting by successive flashbacks his recruitment into the secret army, his training and his arrival on the island in the midst of fighting, succeeds a kind of temporal stasis in which only nature and the return of the rainy season serve as benchmarks.

There is the withdrawal and the organization of survival in the jungle, then the questions, ” who are we fighting against? », And finally the first tensions. Of the initial group of four soldiers, they will very quickly remain only two. But Onoda will never doubt. Even when a delegation from his country, accompanied by members of his own family, went there in 1950 to urge him to surrender. The soldier remains faithful to the precepts instilled in him: survive and resist at all costs. ” Glory without glory “Whose secret is” integrity », Major Taniguchi told him before his departure. In this blindness or this madness, the soldier will however find a form of accomplishment and inner peace. Especially in the way his withdrawal from the world reconnects him with nature and the elements.

Arthur Harari, and this is the point of his approach, does not judge Onoda. And puts his staging in tune with the human adventure he is going through. Eschewing any aesthetic and formal overload, she eyes the side of John Ford and Kurosawa, rather than the baroque lyricism ofApocalypse Now by Francis Ford Coppola. Combining the grandiose beauty of landscapes and intimate scenes filmed behind closed doors in a makeshift shelter, it makes us live in an almost sensory way the experience lived by the soldier, including in its duration (2 h 45) without ever losing focus. spectator on the way.

Born in Paris in 1981, Arthur Harari is the grandson of Clément Harari actor and theater director

Between 2005 and 2013, he shoots three short films and a medium-length film Hand on the face with his brother Tom, as cinematographer and his brother Lucas, also illustrator, as actor

In 2016, he realises Black Diamond which was critically acclaimed and won the César for Best New Actor for its actor, Niels Schneider

Companion of the director Justine Triet, he co-wrote two of his films Sibyl (2017) and Anatomy of a fall (2019) which has not yet been released in theaters