Nothing new .. From the beginning, the dean fell 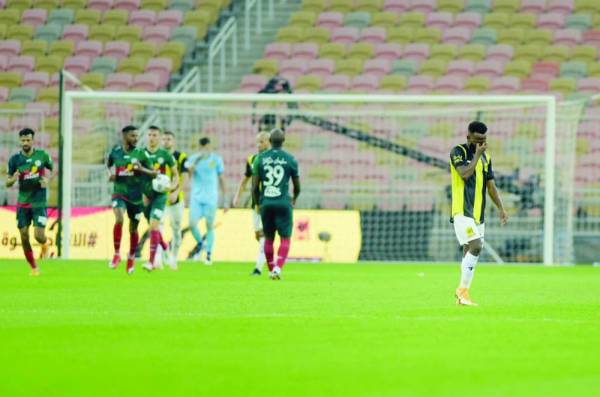 The catastrophic mistakes of Al Ittihad defenders Bruno Ofini and Hamdan Al Shamrani caused their team to lose from its guest Al Ettifaq by a score of 1-2 at the end of the first round of the league.

The first half appeared at a modest level on both sides, as it was the first match of the season, and their lack of matches, and exaggerated caution prevailed over the two teams, so if one of them misses the ball, his players initiate a return.

The danger of Al-Ittihad was represented by Fahd Al-Mawled, as he launched a solitary ball, but Al-Rubaie saved the situation, and another opportunity with a Fahd shot from inside the area around Imbulehi to Zawiya.

On the other hand, the agreement relied on starting the attack from the back and rotating the ball between the players in a slow manner and short passing, and Faris Al Dahna’s performance improved after the middle of the first half, and his chances were not completed to pose a danger to Grohe’s goal.

With the second minute of the second half, Romarinho squandered an opportunity while he was just steps away from the goal. A minute later, Grohe blocked Docara’s powerful shot.

Saud Abdel Hamid got a penalty kick after being hit by Mitch, which Fahd Al-Mawlid confidently took as the first goal (60).

Bruno Ovien committed a fatal mistake by returning a short ball to Grohe, who was forced to block Walid Azaro, which the referee counted as a penalty by Philip Kish as a goal equal to (80).

Azaro wasted two opportunities, which he did not use optimally, before he compensated by obtaining a penalty kick that Hamdan Al-Shamrani caused with a rudimentary mistake, which Kish implemented, from which he scored the second goal, d (87).

Al-Ahly team defeated its host Al-Baten with a free goal scored by Salman Al-Moasher in the 18th minute.

The first half was an argument between the two teams, and in the second half Al-Batin tried to amend with a field control through which Al-Ahly was forced to retreat and despite the changes made by Vladan, Al-Ahly’s coach, the Al-Batin team continued to control the field and wasted many scoring opportunities and canceled a goal for Al-Batin, while wasted Omar Al Somah has many opportunities.

Al-Fateh team blew the first surprises of the season by defeating its host Al-Nasr, the runner-up of last season’s league champions, with a score of 2-1.

Al-Fateh missed many opportunities to score – and Al-Fateh, led by coach Vitoria, provided a great level, while victory was not at the level expected of him as he lacked focus and opportunities, and Al-Fateh advanced early through the Algerian Sufyan bin Dabke after a fatal mistake by Abdullah Mado after returning the ball to the goalkeeper short. Ibn Dabkeh took advantage of it and played it inside the net.

In the second half, Khaled Al-Ghannam managed to equalize the score, but Ibn Dabkeh returned and scored the second goal of Al-Fatah (63).

The major wins your cons