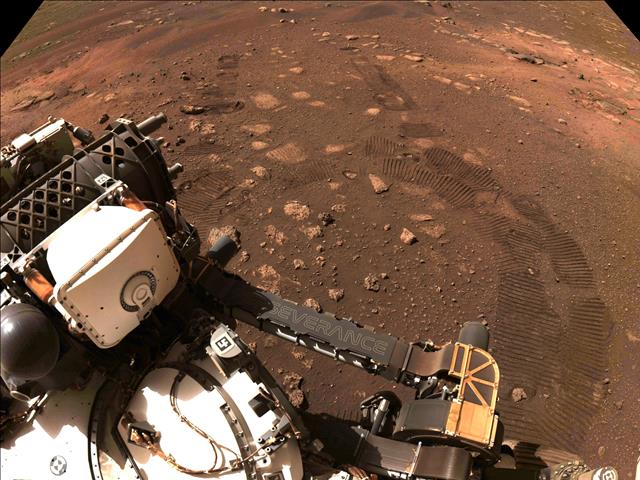 NASA’s latest Mars rover, Perseverance, performed its first test drive on the Red Planet, covering a distance of about 6.5 meters across the Martian landscape, a “major milestone” before it begins its science operations.

The drive lasted about 33 minutes, propelling the rover forward by four metres, where it then turned to the left by 150 degrees and backed up 2.5 meters into its new temporary parking space, the American space agency noted in a statement.

According to NASA, the drive served as a mobility test to check out and calibrate every system, subsystem, and instrument on the Perseverance rover, which it said is a major milestone before the science operations get underway.

“When it comes to wheeled vehicles on other planets, there are few first-time events that measure up in significance to that of the first drive,” said Anais Zarifian, the mobility test bed engineer of the Mars 2020 Perseverance rover at NASA’s Jet Propulsion Laboratory (JPL) in Southern California.

“This was our first chance to ‘kick the tires’ and take Perseverance out for a spin. The rover’s six-wheel drive superbly. We are now confident our drive system is good to go, capable of taking us wherever the science leads us over the next two years, ”Zarifian said.

Regular commutes of over 200 meters are expected once the rover begins pursuing its science goals, including the search for signs of ancient microbial life, NASA said.

As part of its mission, the rover would characterise the Red Planet’s geology and past climate, and pave the way for human exploration of Mars.

It is also expected to be the first to collect and cache Martian rock and soil.

Since it’s landing on Mars on February 18, the rover has undergone several routine checks, including a software update, replacing the computer program that helped land Perseverance with one NASA will rely on to analyze the planet.

On March 2, NASA said its engineers unstowed the rover’s 2-meter-long robotic arm for the first time, flexing each of its five joints over the course of two hours.

All the while, the space agency said the rover continues to send down images from Mars using the most advanced suite of cameras ever to travel to the Red Planet.

“Every picture from Perseverance is relayed by either the European Space Agency’s Trace Gas Orbiter, or NASA’s MAVEN, Mars Odyssey, or Mars Reconnaissance Orbiter. They are important partners in our explorations and our discoveries, ”said Justin Maki, chief engineer for imaging and the imaging scientist for the Mars 2020 Perseverance rover mission at JPL. PTI

I’m on the move! Just took my first test drive on Mars, covering about 16 feet (5 meters). You’re looking at the very beginning of my wheel tracks. Many more to make. pic.twitter.com/7tFIwWFfJ4

WATCH NOW🔴
Members of my team are providing updates on the “firsts” I’ve achieved so far and what my plans will be as I set out on the search for ancient life on Mars. https://t.co/XHWGLYRGw4.