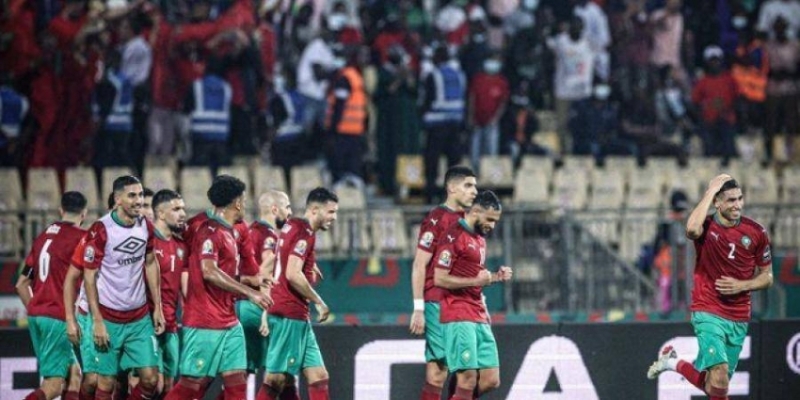 Morocco qualified for the quarter-finals of the African Nations Cup in Cameroon after beating Malawi 2-1 after turning from a goal down into a deserved victory in the round of 16 at Ahmedou Ahidjo Stadium in Yaounde.

The Moroccan team, which has been seeking its first title in 45 years after winning the championship in 1976, will meet in the quarter-finals with the winner of the confrontation between Egypt and Ivory Coast on Wednesday at the end of the round of 16 matches.

Despite the Moroccan team’s control over the first half completely, Malawi opened the scoring after seven minutes from the start thanks to Frank Mahango’s goal with a huge and surprising shot from about 40 meters into the net, Yassine Bounou, the Moroccan goalkeeper who advanced from his goal.

Morocco responded with a shot from Adam Masina in the 17th minute from inside the penalty area, which was saved by Charles Thom, Malawi goalkeeper.

In the 23rd minute, Mahango missed another dangerous opportunity from the left side when he fired a hasty shot that passed next to the left post of Bono’s goal.

Four minutes later, Ashraf Hakimi fired a superb free kick that Thom brilliantly saved before Imran Loza followed up, but the defense pushed it away to a corner kick.

The crossbar received a direct shot from Moroccan captain Roman Sais in the 33rd minute after a cross pass, then Thom saved two minutes later a chance from Youssef Al-Nusairi from a solo position.

Five minutes before the end of the first half, the post and goalkeeper responded with another shot from Hakimi, then Sofiane Boufal, the best player in the first half, missed a dangerous opportunity from a solo situation.

Al-Nusairi scored the equalizer with a header in the second minute of stoppage time for the first half after a cross pass from Salim Amlah.

Hakimi scored the winning goal in the 70th minute with a superb free kick shot in the upper corner of Thom’s goal, before repeating the attempt in the third minute of stoppage time, but the Malawi goalkeeper was on the lookout for it.