Magali Bragard and the MaMaMa association to help infants 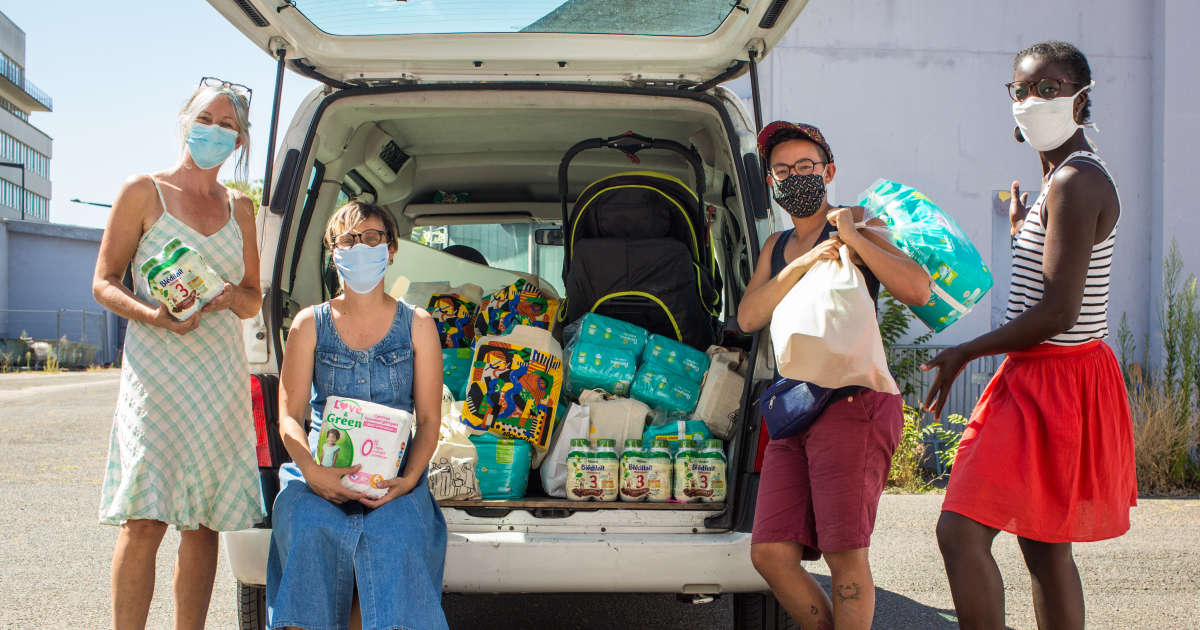 With the support of Harmonie Mutuelle

France was still confined. In May, in Neuilly-sur-Seine, Magali Bragard and Marguerite Delalonde were waiting for Ria downstairs from her little maid’s room. They were there to come to the aid of this Filipino cleaning lady paid illegally by a bourgeois family in the city. Several weeks ago, her employers had left to confine themselves to the Ile de Ré, leaving her without the resources to provide for her 18-month-old baby. Diapers, food… It was one of the very first deliveries from the MaMaMa association. “We understood that precariousness in Ile-de-France really lurks everywhere, including in places where we least expect it”, remembers Magali Bragard.

Maud Sarda, the influencer of Emmaus

This still photographer, who couldn’t stand being confined ” without doing anything “, very quickly chose to offer his services as a volunteer to the AP-HP. Responsible for calling the sick in Seine-Saint-Denis, she found herself in the front row when the department was hit hard by the pandemic. “I was shocked by the size of the number of patients who were in great financial difficulty. Especially mothers. ” In the field, she notes that the health crisis has pushed a whole section of the population into poverty. To the point that, in the richest agglomeration of the world’s fifth largest economy, parents no longer had enough to feed their babies.

In 2019, the Ile-de-France Food Bank had already come to the aid of more than 25,000 children under the age of 3. But since the health crisis, the number of beneficiaries has jumped by 25%. Among them, many informal workers, many in Seine-Saint-Denis, and people in an irregular situation. “Some mothers skipped meals so they could buy diapers. Weakened, they could no longer breastfeed and found themselves buying powdered milk, which is very expensive ”, says Magali. “Unfortunately, this kind of case was not anecdotal”, adds Aïcha Diémé, co-founder of the association.

With three other volunteers from the AP-HP, Magali, Marguerite, Marielle and Aïcha decide to act. They created the MaMaMa association (based on the first syllable of the first names of three of the four founders), and it all started… with an email to the Blédina brand. In two weeks, the baby food giant donates 13 tonnes of baby food to them: polenta, small apple-banana-blueberry jars, milk gourds … “We had to find something to transport and store all this very quickly. “ The statutes of the association are sent one evening a few minutes before midnight. “The next day at 11 am, we signed the inventory of the warehouse and at 11:30 am, a semi-trailer with 35 pallets of baby food landed”, remembers Magali. Since then, the association has delivered more than 3,000 food parcels, 80% of which are in Seine-Saint-Denis. To benefit from it, nursery nurses just have to fill out an online form. This does not prevent Magali Bragard’s phone from ringing every ten minutes. That day, it’s a dad whose baby can’t wait for the delivery scheduled for the next day: he’s hungry. “We have a very flexible organization, which allows us to adapt to these situations”, she explains, after having assured the young father that he could pick up the package in the evening.

Marguerite (right) and a volunteer deliver basic necessities to an emergency shelter in Stains. (Magali Bragard)

Cécile (1), dental assistant and mother of Adam, 10 months, burst into tears of relief at the first delivery. “I don’t know how I would have done it, they saved me. I no longer slept, I no longer bought anything … ” His small salary was almost entirely swallowed up in the rent. His companion, a VTC driver, has also seen his income fall since confinement. “I couldn’t even afford the vaccines for my son. I had come to sell business on Le Bon Coin. “ Resourcefulness was also the option imposed on the father of Meddassir and Muzzammil, six-month-old twins. Originally from Bangladesh, he worked occasionally in markets, but everything stopped overnight. It was his 14-year-old daughter, Sarah (2), who contacted the association, because the meals distributed by the Secours populaire, in the hotel where the family is staying, are not suitable for infants. “MaMaMa has already delivered three times to us, and we are expecting a fourth package next week”, says the schoolgirl.

These families in great precariousness, Brigitte Saleg spots them at a glance. “Sometimes they don’t even have a kitchen to prepare food. They are therefore very demanding, we are a little overwhelmed. “ The nursery nurse works in one of the 41 maternal child protection centers (PMI) in the department with which MaMaMa works. In most cases, volunteers deliver to PMI centers, where parents pick up their packages. At each delivery, we take the time to exchange, if only to ensure the correct composition of each delivery. Because the packages are personalized: this is the complexity of food aid for infants. A logistical headache, but a necessity, recalls Aïcha Diémé, a pediatrician by training: “A baby needs a certain type of milk and food, especially depending on his weight. “

Over the months, the association has grown, as has the size of the packages. “We quickly understood that these mothers lacked food, but also everything else”, exposes Magali Bragard. In the warehouse in Saint-Denis, a stone’s throw from the foodstuffs, there are now piles of diapers, large bins filled with bottles and pacifiers, sanitary napkins, shelves of toys and educational books and two large aisles boxes overflowing with clothes sorted by age. Not to mention the strollers corner. Magali Bragard, who confides “Never have worked as much in her life as since she founded the association”, hopes to make MaMaMa a lasting solidarity platform. There is no doubt that it will still have its work cut out for it: according to the latest Secours populaire barometer, one in seven French people skip meals for financial reasons. And this rationing concerns more particularly… women.

(1) and (2) The first names have been changed.Will the refugees save French agriculture? This is the bet of this association