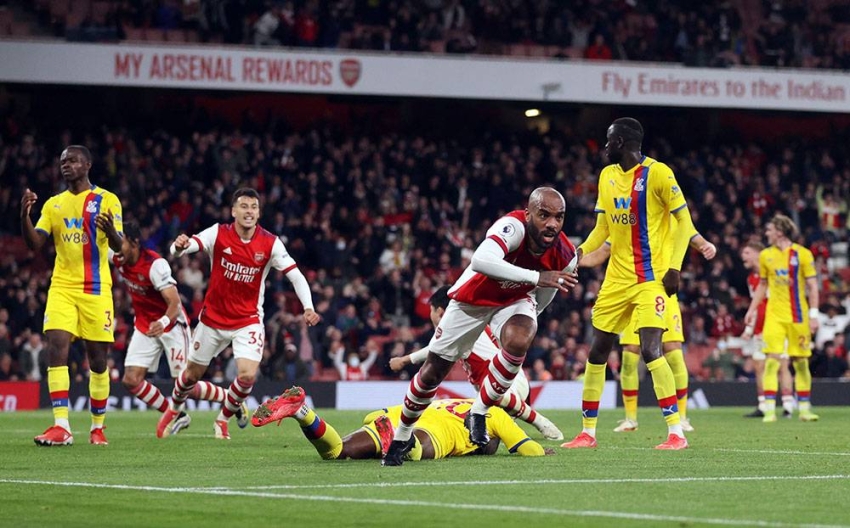 French substitute striker Alexandre Lacazette saved his Arsenal team from the London derby loss against its neighbor Crystal Palace by drawing a 2-2 draw at the Emirates Stadium in the capital at the end of the eighth stage of the English Premier League.

Arsenal was the first to score through its Gabonese international captain Pierre-Emerick Aubameyang (8), and Crystal Palace turned the table in the second half by scoring two goals through Belgian Christian Benteke (50) and Frenchman Odson Edouard (73).

While the match was breathing its last, Lacazette, the Norwegian substitute Martin Odegaard (67), scored the equalizer in the fifth minute of stoppage time, depriving the former Arsenal captain, his midfielder and current Crystal Palace coach, Patrick Vieira, of his second victory. season, and the first in his first match against his former team.

Vieira was a guest for the first time as a coach at the team’s stadium, where he starred as a player between 1996 and 2005 and was crowned with him under the leadership of his compatriot, the outstanding coach, compatriot Arsene Wenger, the Premier League title three times and the English Cup four times.

The 45-year-old was the captain of the London team when the latter won the Premier League title for the last time in the 2003-2004 season without receiving any defeat. To defend the colors of Juventus and then Inter Milan.

Crystal Palace, whose Ivory Coast striker Wilfried Zaha was absent due to illness, dedicated his contract to Arsenal at the Emirates Stadium, where he avoided losing against him for the fourth match in a row.

It is the second straight draw for Arsenal, compared to three victories and the same draw, raising his score to 11 points in twelfth place, compared to eight points for Crystal Palace fourteenth.

Arsenal first scored through Aubameyang when he took advantage of a ball that was removed by Spanish goalkeeper Guita after a shot by Ivory Coast international Nicolas Pepe from inside the area, so he followed it from close range into the empty goal (8).

It is the third time in a row that the Gabonese international has scored in the Premier League for the first time since September 2019 when he did it five times in a row.

Smith Rowe fired from outside the area with a powerful ball that was saved by Guita (21), and Conor Callagher responded with another from the edge of the area in the hands of Aaron Ramsdale (23).

Ramsdale starred in depriving Crystal Palace of a tie in the last third minute of the first half when he brilliantly saved a powerful shot by Callagher.

Ghanaian international Thomas Partey almost did it at the beginning of the second half with a powerful right-footed shot from outside the area that passed near the left post (47).

Benteke managed to equalize when he took advantage of a ball kidnapped by Ghanaian international Jordan Ayew from his compatriot Barty, so he penetrated the area and manipulated Brazilian defender Gabriel before he fired a powerful shot crawling right in his right from close range to the left of Ramsdale (50).

Ramsdale continued his brilliance by removing a powerful shot from outside the area to a corner (57).

Crystal Palace succeeded in advancing from a counter-attack through which the ball reached Edward at the edge of the area, and he penetrated inside and shot it powerfully with his right into the ceiling of the goal (73).