Free golf trial for women in the International Women’s Championship 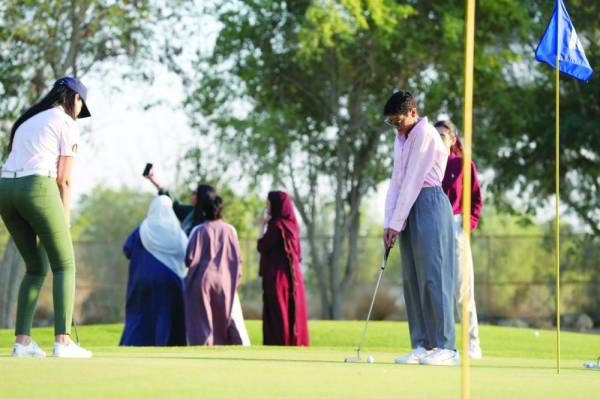 The Kingdom of Saudi Arabia has announced the launch of the first sports initiative of its kind in the world, whereby women across the Kingdom will be able to try golf for free.

The “Ladies First Club”, the first of its kind in the world, created by the Saudi Golf Company, will be launched next month in conjunction with the launch of the Saudi Aramco Women’s Golf Championship presented by the Public Investment Fund, which is the first of its kind in the Kingdom. The club will offer free membership. Including golf classes, access to the shooting court, and tours of three different 18-hole courses, the club will be open to all Saudi women, where membership and other benefits will be granted to the first 1,000 participating women.

Female athletes registered in the “Ladies First Club” will also be granted membership in the Riyadh Golf Club, the Derab Golf Club, or the Royal Greens and Country Golf Club located in King Abdullah Economic City, according to the regions in which they are located.

Membership will also include a digital educational package entitled “Introduction to Golf”, which will provide monthly seminars dealing with the main elements and rules of golf for beginners. Each of the three golf courses will host the “Ladies First Clinic” of golf once a month, led by a golf professional, which will conclude. With an on-pitch program for all of the participants and a chance to play a round in hole # 18.

All women’s club members will have access to the entire stadium, and the top 12 players in the program will be granted full membership throughout the year to play on the stadium of their choice.

On this innovative initiative, Mr. Majed Al-Sorour, CEO of Golf Saudi Arabia, commented: “The Ladies Club will be one of the clubs that have no equal, as it is an innovative and new initiative of its kind that aims to develop the game of golf throughout the Kingdom of Saudi Arabia. Ideal for presenting the first women’s golf championship in the Kingdom, the Saudi Aramco Women’s Golf Championship presented by the Public Investment Fund, and this exceptional event is immortalized in a distinctive way through this initiative. ”

Sorour added, “Golf is witnessing an increasing growth in the Kingdom of Saudi Arabia and we have ambitious goals to achieve them in this sport. We have also noticed an increasing interest by golfers towards it, and we hope that the launch of the Ladies Club First will help support us in our mission to spread this sport among women throughout the Kingdom. ».

In addition to the benefits mentioned, the club will organize a number of social activities for women in the morning, such as Pilates classes, yoga, bridge sports and other social and entertainment activities. In addition, subscribers will enjoy exclusive discounts at all three golf club restaurants and stores, and will receive the benefit of enjoying full membership options at reduced prices upon completion of the program.

Maha Al-Hadiwi is the first and only Arab golfer to have played in the women’s European tour so far, and she will participate in both Saudi championships next month. On the initiative, she commented: “I support all initiatives aimed at encouraging women’s participation in Saudi Arabia in the game of golf, and the idea of ​​the women’s club. First, which was created by Golf Saudi, is very unique and wonderful. From my experience, there is no better way to present this sport to a new group of players than to make it an enjoyable, social and inclusive sport, and this initiative brings together all these advantages.

From an early age, player Sarah Salhab (27 years old) started playing golf at the Dirab Club stadium in Riyadh. She says today: “The Ladies Club First initiative is a distinct idea, as it constitutes an opportunity to build a base capable of transferring women interested in the game to a more advanced stage through help and support. It is provided by a team of professionals, which helps build an environment capable of developing female players, and this is definitely a special job. ”

Salhab added: “Golf is an enjoyable sport that combines physical and mental exercises. In addition, it is a sport that we practice in green natural spaces, which is beautiful, especially in Saudi Arabia. I really enjoy playing golf, and in my opinion it is important for more women to practice golf because it is a very healthy sport. It is practiced in open spaces and helps to achieve greater social communication. Today, through the Ladies First Club initiative, interested parties will find an easier opportunity than ever to learn about the game and practice it. ”

The Ladies Club will be officially launched during the preparation week for the Saudi Aramco Women’s Golf Championship presented by the Public Investment Fund, which will take place from 12 to 15 November 2020, two days before the start of the Saudi Women’s International Teams Championship, which will witness the participation of teams consisting of four players who will compete For a share of the prizes valued at $ 500,000, the tournament will be held from November 17-19, 2020.

Women wishing to register with the club can do so by logging into the Saudi Golf website starting from the week in which the two major sporting events in the Kingdom’s history will be launched.