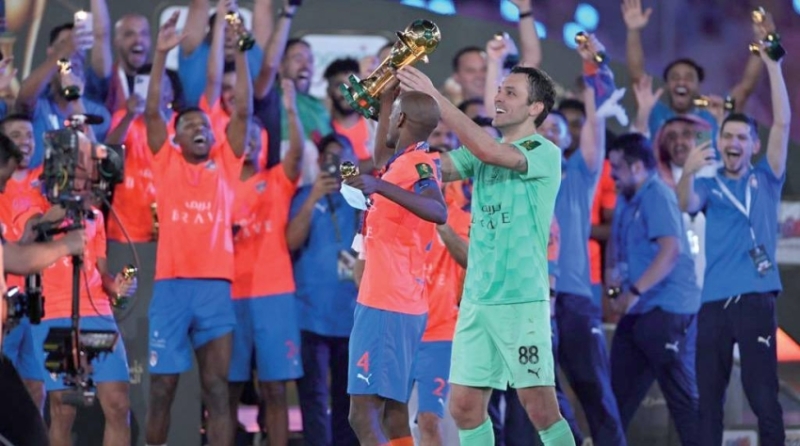 Al-Fayhaa team won the Custodian of the Two Holy Mosques Cup, for the first time in its history, after beating Al-Hilal 3-1 on penalties in the final match of the competition, which took place yesterday evening, Thursday, at the Radioactive Jewel Stadium in Jeddah, after the original and extra time for the match ended in a 1-1 draw.

Al Hilal was the first to score through Salem Al Dosari in the 48th minute, and Al Fayha equalized in the 66th minute with a goal by Ramon Lopez. Al-Hilal besieged Al-Fayhaa from the start, due to its desire to finish the match early, but it faced defensive toughness from Al-Fayhaa players.

The rhythm of the match decreased after 20 minutes, the match tended to calm without serious chances on goal, with the exception of Moussa Mariga’s shot, and Pereira’s shot.

Al-Fayhaa almost scored the first goal from a set ball, after Mariga hit Al-Maayouf, so the ball passed from everyone to the outside.

Before the referee called the end of the first half, Salem Al-Dosari scored the first goal for Al-Hilal after receiving a ball from Salman Al-Faraj, who shot it surprisingly in the narrow corner to the right of goalkeeper Vladimir as a first goal in the 48th minute, to end the first half.

Al-Hilal coach Diaz moved and tried to activate the midfield, so he pushed the young man, Musab Al-Juwair, in the place of Abdullah Atif.

Al-Fayhaa coach Fuk responded by making two substitutions, so he pushed the wing Ali Al-Zaqaan in place of Sultan Mandash, and striker Ramon Lopez replaced Abdul Rahman Al-Sfri an hour after the match.

The substitutes succeeded in the first attempt to score a tie after Ali Al-Zaqaan’s cross by Brazilian Ramon Lopez, who put it in the ceiling of the goal over Abdullah Al-Mayouf as a equalizing goal in the 66th minute.

Al-Fayhaa coach made a new substitution, removing the injured full back, Mohamed El-Bakaoui, and pushing the Niger wing, Amadou Mutari.

Al-Fayhaa almost scored the second goal in the 76th minute, but Trajkovski’s shot passed from the side of the post.

And with the 90th minute, Mutari received a long ball from Bana, who bypassed Nasser Al-Dosari and played it, so that Al-Mayouf saved his goal from a verified goal.

Al Hilal started pressing to tip it off, and the first chance came in the first extra period after Saud Abdul Hamid’s cross, but Ighalo’s ball was caught by Vladimir.

Al-Hilal returned to the threat of Al-Fayhaa goal after an individual effort by Musab Al-Juwair, who passed it to Salem Al-Dosari, who played it next to the post.

Moussa Mariga tried to score the winning goal, but his shot went through the side of the post.

Diaz made a new change to push the Brazilian Michel, Mariga’s place, with the 100th minute.

Before the referee called the end of the first extra period, Michel penetrated the penalty area and hit it to be blocked by Vladimir.

With the start of the second overtime period, Al-Fayhaa coach pushed the cards of Youssef Al-Harbi and Fawaz Al-Taris, in place of the Macedonian Alexander and Muhammad Abu Saban.

But the situation continued as a Hilal attack without serious opportunities and defensive determination from Al-Fayhaa, until the referee blew the final whistle with a 1-1 draw, and both teams resorted to penalty kicks.