Extending the season until June 23 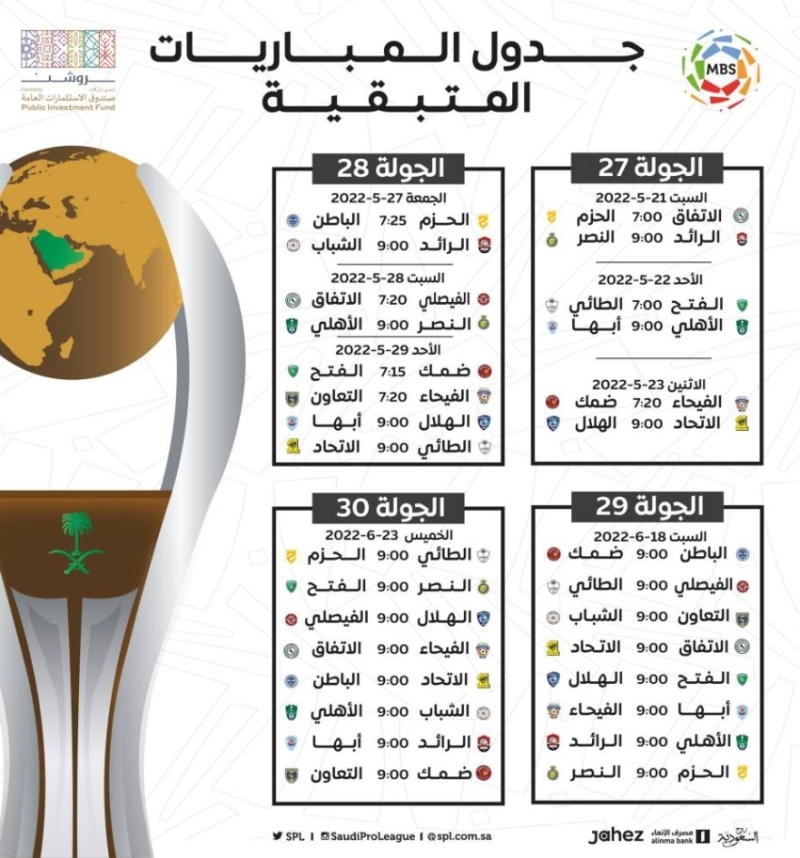 The decision of the Ministry of Sports to suspend sports competitions in mourning for the late Sheikh Khalifa bin Zayed Al Nahyan, President of the sisterly United Arab Emirates, gave a chance to catch a breath, before the start of a stage of football running to end the current season.

For its part, the Saudi Professional Football League issued a new amendment to the remaining four stages of the Saudi League this season, due to the postponement of the twenty-seventh stage after the death of the President of the United Arab Emirates, Sheikh Khalifa bin Zayed Al Nahyan.

The remaining matches of the twenty-seventh stage will be held between May 21 and 23, most notably the Al Ittihad and Al Hilal summit on Monday 23 of it.

The Saudi Ministry of Sports announced the suspension of sports competitions from Friday until Monday, after the death of the President of the Emirates.

The matches of the 27th stage began on Thursday with two matches, where Al Shabab defeated Al Faisaly 1-0 and Al Taawon Al Batin with the same result.

Friday was scheduled to meet Al-Nasr with Al-Raed, Al-Fayha and Damak, while Al-Fateh will meet with Al-Ta’i and Al-Ahly with Abha, provided that the matches will conclude on Sunday with the leaders’ confrontations with Al-Hilal, the defending champion, and the agreement with Al-Hazm.

Al-Ittihad leads the standings with 61 points from 26 matches, six points behind its runner-up, Al-Hilal, the defending champion in the last two seasons, and hopes to win its first title since 2009.