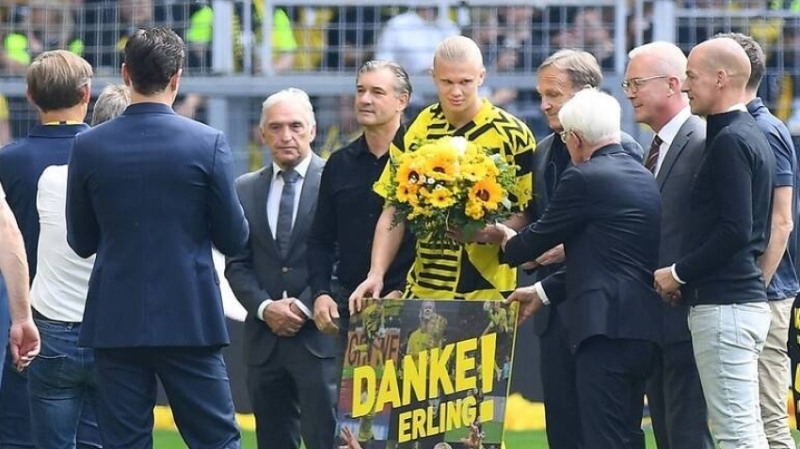 Norway star, Erling Haaland, contributed in his last match in the German football league, in the victory of his team, Borussia Dortmund, against its guest, Hertha Berlin (2-1) today, Saturday, in the 34th round of the “Bundesliga”.

Last Tuesday, Manchester City announced that it had reached an agreement with Borussia Dortmund, to transfer Haaland to the English team during the next summer transfer period.

Before the start of the match, Borussia Dortmund was keen to honor its Norwegian top scorer for his time with the “Festival Lions” team.

The team’s fans also chanted the player’s name, so Halland went to them and exchanged greetings with them.

Erling scored the equalizer for Borussia Dortmund from a penalty kick in the 68th minute, before his colleague, striker Youssoufa Mukoko, grabbed the winning goal for the hosts (2-1) in the match that brought them together at the “Signal Iduna Park”, in the thirty-fourth and final round of the league. .

It is noteworthy that Erling Haaland, 21, moved to Borussia Dortmund in January 2020, to present his best levels in European stadiums, and be the focus of the attention of many major clubs, before Manchester City kidnapped him.

Halland scored 86 goals in the Borussia Dortmund “Festival Lions” shirt during 89 matches, over two and a half seasons, in various competitions, and assisted 23 goals.