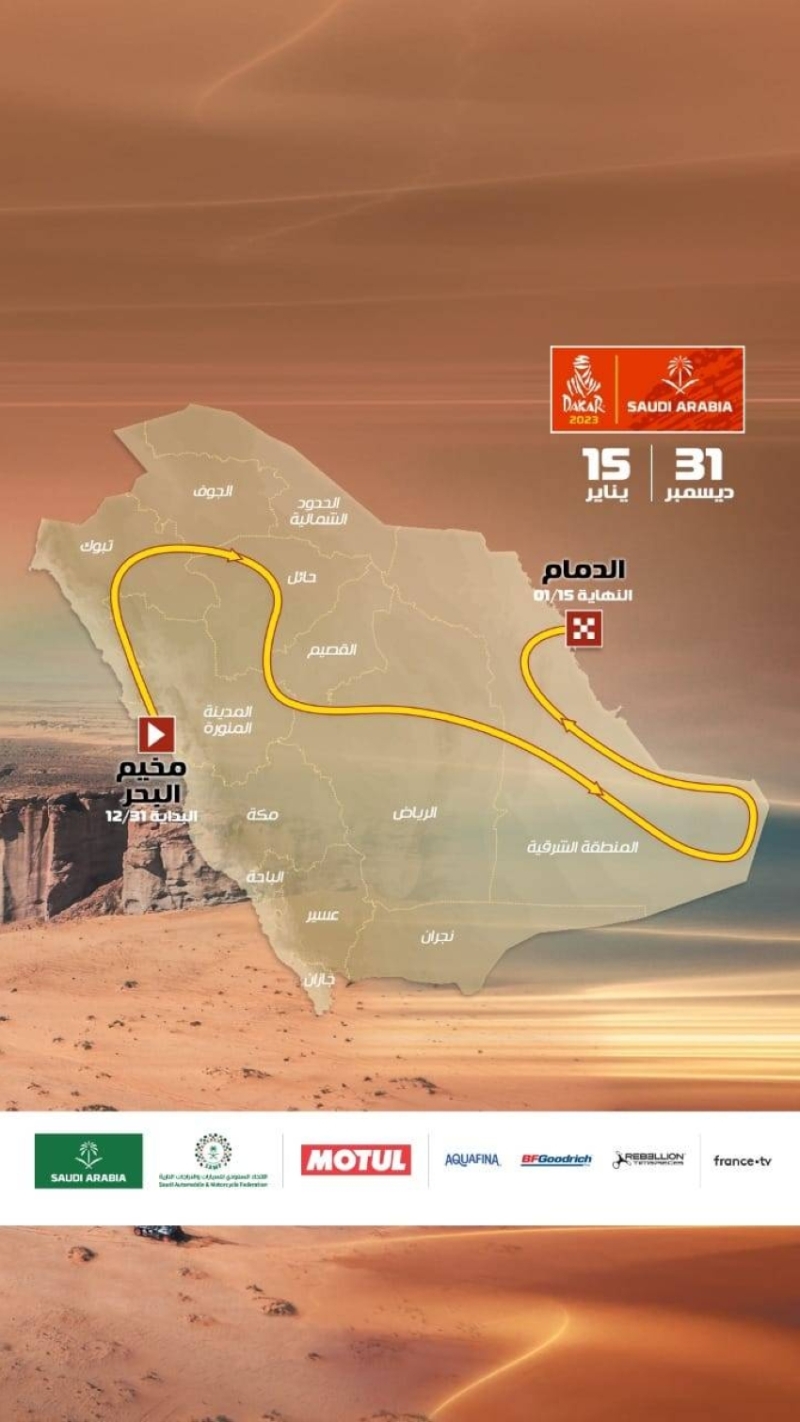 This came during the press conference held (remotely) to announce the return of the rally competition, which will start from a camp on the shores of the Red Sea, to cross the Kingdom from east to west, during which the contestants will pass 14 stages, in addition to one preliminary stage over 15 days of competitions. , including 3 stages in the Empty Quarter, one of which is a marathon, which precedes the drive towards Dammam, with the final curve of the race on January 15, 2023.

The Saudi Dakar Rally 2023 features 70% new tracks, punctuated by many areas that include different types of terrain; To open the way for the participants to explore the most amazing landscapes and archaeological areas in the Kingdom, the competitors will also take on new challenges that will raise the level of suspense and enthusiasm. Special stages between 350-500 km, after reducing the distance of the connecting stages along the track.

On this occasion, His Royal Highness Prince Abdulaziz bin Turki Al-Faisal, Minister of Sports, expressed his happiness for holding the Dakar Rally in the Kingdom for the fourth time in a row, pointing to the importance of hosting the Dakar Rally as a milestone on the Saudi sports map, which contributed to attracting the world’s attention to the Kingdom. He stressed the need to redouble efforts to continue the series of successive successes achieved by the Kingdom with the determination and determination of its people, and its unique capabilities.

His Highness said: “The Dakar Rally stands out as an exceptional global event, hosted by the entire Kingdom for the fourth year in a row, and this year we will seek to harness the experiences we have gained in organizing an exceptional version of this great global event to embody the directives of the wise leadership and the vision of the Custodian of the Two Holy Mosques, King Salman bin Abdulaziz Al Saud and His Royal Highness Prince Mohammed bin Salman, the Crown Prince, may God protect them, affirming the Kingdom’s high potential and leadership in embracing and organizing the most prominent international sporting events, in line with the objectives of the Kingdom’s Vision 2030.

The organizers will start receiving applications to participate in the 45th edition of the Saudi Dakar Rally starting next Monday, June 6, 2022, and the submission deadline will be on the 31st of next October. While technical and administrative examinations will be conducted over a period of 3 days, from 28 to 30 November, the participants will start arriving in the Kingdom on 27 and 28 December, with the preliminary stage and opening ceremony taking place on 31 December, before the official competitions start on 1 January.

In turn, His Royal Highness Prince Khalid bin Sultan Al-Abdullah Al-Faisal, Chairman of the Board of Directors of the Saudi Federation of Cars and Motorcycles and the Saudi Motorsports Company, expressed his pride and pride in the return of rally competitions, as the Kingdom hosted this major global event for the fourth time in a row, praising His Highness the fruitful cooperation shown by government agencies. , to provide all the ingredients required to produce an exceptional version of the rally, and to ensure success in organizing in a way that reflects ambitions, embodies the enormous capabilities, development and prosperity experienced by the Kingdom, and consolidates the Kingdom’s leading position as a new home for motorsports in the world.

His Highness said: “In the name of God, we begin to write a new chapter in the story of the Saudi Dakar Rally…. Last year’s edition was the largest in terms of participation in the ancient history of the rally, and its activities witnessed exciting competitions in all its categories, and we promise the participants in this year more Challenges that will raise the level of suspense and excitement on the track, and new exciting adventures in the deserts of the Kingdom of varied terrain.”

The Kingdom hosted the Saudi Dakar Rally competitions last January for the third time in a row, with the participation of a group of the most prominent international drivers, as it attracted more than 1,000 participants representing 70 countries from around the world, over 14 days of adventure and challenge during 12 stages, competing During which drivers are in 6 categories.