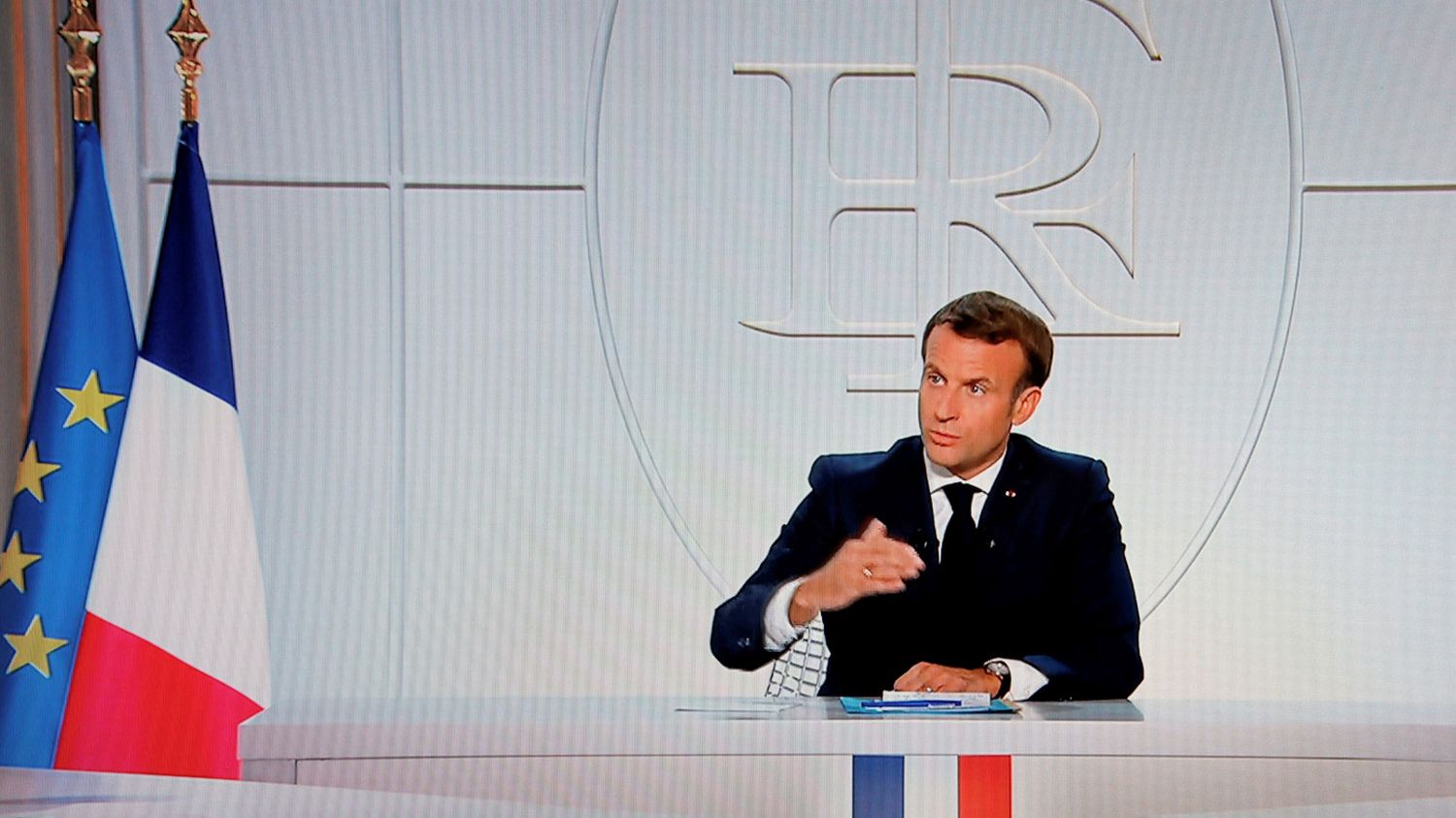 A new step in the fight against Covid-19. Emmanuel Macron spoke, Wednesday, October 14, from the Elysee Palace during a much-awaited 45-minute interview, on TF1 and France 2, to announce new measures in the face of the resurgence of the epidemic. During this interview, he also launched a message of hope and indicated that he wanted to be transparent both on knowledge of the disease and on the failures of the executive.

>> Follow the latest information on Covid-19 in our direct

A few minutes before the interview, the government had restored by decree the state of health emergency, which ended on July 10. It will be effective from Saturday October 17 throughout the national territory, “so that measures strictly proportionate to the health risks incurred can be taken”.

“It would be disproportionate to reconfigure the country”, warned the President of the Republic. However,“our aim must be to reduce the private contacts which are the most dangerous”, he added. Curfew between 9 p.m. and 6 a.m. will therefore apply from Saturday, October 17, in Ile-de-France and in eight metropolitan areas, said Emmanuel Macron. These are the metropolitan areas of Grenoble, Lille, Lyon, Aix-Marseille, Montpellier, Rouen, Saint-Etienne and Toulouse.

This curfew will last at least “four weeks”, warned the head of state. “The government is in a position to decide it for four weeks”, he detailed, adding: “we will go to Parliament so that we can try to extend it until December 1”. The curfew will therefore probably last six weeks.

The head of state gave the example of the curfew in Guyana to justify this measure. Over there, “it slowed things down, said Emmanuel Macron. The transmission rate was reduced during the height of the pandemic. It works.“

Exceptions to the curfew will be possible, thanks to proof

From Saturday, in areas where the curfew is applied, it will therefore be necessary to be at home at 9 p.m., and cinemas, theaters, restaurants and other shops “will close for that hour”, said Emmanuel Macron.

However, as during confinement, exceptions will be possible, in particular “for all those who come home from work after 9 pm or who work at night” or “for all those who will have a health emergency”. “There will be no traffic ban but a strict limitation” at curfew hours, summed up the president. A press conference by Prime Minister Jean Castex and ministers will take place on Thursday to unveil the “details” of these authorizations, said Emmanuel Macron.

A fine of 135 euros for non-compliance with the curfew

As with not wearing a mask, failure to comply with the curfew will be penalized with a fine of 135 euros. “There will be checks and fines (…) with 1,500 euros in the event of a repeat offense. Everyone must be aware of the risks and issues. The French were exemplary during the confinement, because they understood that it was to protect the most fragile and caring. If we do not want to take harsher measures in 15 days or 1 month there will be checks “, he said.

No restriction of travel between regions

“There will be no restriction on transport” in common, as was the case during confinement, said Emmanuel Macron. Otherwise, “we will not prevent people (…) from going on vacation”, added the president, ensuring that there would be no limitation of travel between regions. “Asking people to stay at home in apartments and not go to a vacation spot, honestly, that would be disproportionate.”

On the other hand, the president recalled that these trips, which will allow family gatherings, should not lead to a decrease in vigilance with regard to barrier gestures. “It is imperative to respect the rules of use, even in the family context”, hammered Emmanuel Macron, citing, among others, respect for physical distancing, wearing a mask, ventilating rooms and washing hands.

The French are advised not to gather with more than six people to better fight against the epidemic. “We try, when we invite friends, not to be more than six at the table and no more than six in the street either “, said Emmanuel Macron.

Exceptional aid of at least 150 euros for the most precarious

Recipients of RSA and APL will receive aid of 150 euros with 100 euros more per child, as in the spring. “It will be between 100 and 450 euros for them, summed up Emmanuel Macron. I prefer this exceptional help, massive, comparable to what we did in the spring, rather than a transformation of our social minima“, said the head of state.

“I wouldn’t say it was a failure, it didn’t work out”, acknowledged Emmanuel Macron, referring to the StopCovid application, which sent only 472 notifications in five months. The president therefore requested an overhaul of the application, whose new name will be “TousAntiCovid”, and which will be “presented on October 22”.

This new version will have the same objective: “identify sources of contamination, trace them and prevent”. It will also give “information on how the virus circulates where you are” and will have “a simple manual” (it will only be necessary to turn it on when “I am in a moment (…) with an element of risk”).

Self-tests available in the coming weeks

“In the next weeks“, Emmanuel Macron promised news on Wednesday evening “strategy” of tests to detect cases of Covid-19 in order to “be able to drastically reduce delays”, recognizing that “we encountered real difficulties on the subject”.

“We are going to adopt a strategy where we will be able to drastically reduce delays” for better “to follow” the circulation of the virus, declared the head of state, We have an innovation that has happened in recent days, recognized by the World Health Organization, the High Authority for Health. These are called these antigen tests. “