Barcelona snatched a fatal draw in the derby against Espanyol 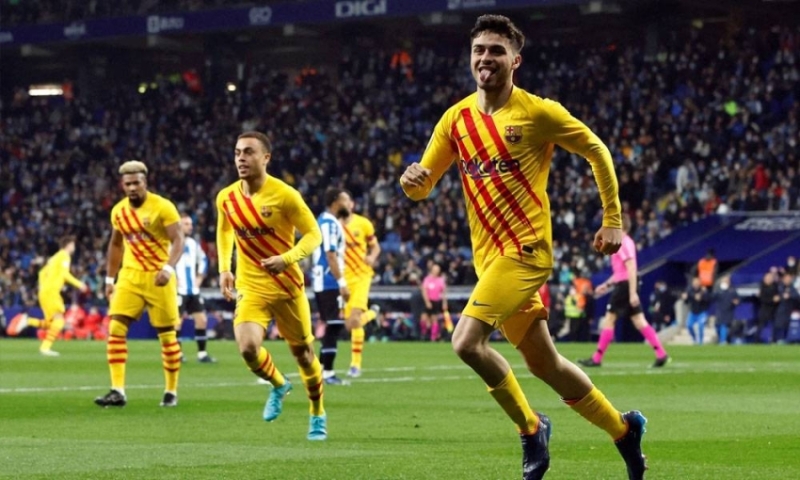 Barcelona kidnapped a fatal 2-2 draw against its neighbor and host Espanyol with the goal of Dutch substitute Luke de Jong in stoppage time, in the match that brought them together on Sunday in the twenty-fourth stage of the Spanish Football League, but he neglected to move away from Atletico Madrid.

Barcelona advanced quickly through the young Pedri after two minutes, while Serje Drader equaled the owners of the land before the break (40), before Raul de Thomas gave them the lead (64). While the match was dying out after Gerard Pique and Nicolas Melamed were sent off, De Jong snatched the equalizer with a fatal header (90 + 6).

The Catalan club had won an exciting 4-2 victory over Atlético Madrid in the previous stage to take the fourth place, but it failed to achieve its third consecutive victory in the league and moved away by two points from the capital’s team, which won a crazy 4-3 victory over Getafe on Saturday.

Espanyol was the first team that coach Xavi Hernandez faced last November, after he was appointed coach of the team, and beat them 1-0 with a penalty kick from Dutchman Memphis Depay.

Brazilian right-back Dani Alves missed the match after he was sent off in the match against Atletico and was replaced by the American Serginio Dest, in the only change to the starting lineup that started against the capital team.

Barcelona surprised its guest with a quick goal after two minutes when Jordi Alba raised a cross from the left side towards the second post, followed by Pedri “on the bird” in the net.

There were no dangerous opportunities until the ball from Gavi crossed to Adama Traore, a powerful shot from inside the area that bounced from the chest of goalkeeper Dio Lopes (37), before Ferran Torres’ header crossed the crossbar (38).

The guests waited until the 39th minute to shoot for the first time on the goal through a left-footed goalkeeper Javier Boadu, before Darder equalized the result with a beautiful spiral shot from outside the area to the left of German goalkeeper Marc-Andre ter Stegen (40).

Ghafi’s goal was canceled after he received the ball due to confusion inside the area, and he followed it into the net after the Video Assistant Referee (VAR) due to an infiltration in the process of building the attack (56).

De Thomas scored the goal for the owners of the land when he received a wonderful ball behind the defenders long into the area from Darder amid poor defensive control from Eric Garcia, tamed and followed into the net (64).

Pique was sent off with a second warning and Melamed with red immediately after an argument between them in stoppage time (90 + 2), before de Jong rose to a beautiful cross from Traore, who followed it into the net (90 + 6).

It was remarkable that Xavi did not use the efforts of Gabonese striker Pierre-Emerick Aubameyang, who arrived in the team for free after being released from his contract with Arsenal, and he participated against Atletico when he entered as a substitute.

Espanyol has not tasted a victory over “Blaugrana” in the league since February 2009 (2-1 at Camp Nou).

– Fekir’s double – Real Betis, the surprise of the season, kept its hopes of reaching the Champions League next season, consolidating its third position with an exciting 4-2 victory at its host Levante.

Betis found himself under pressure after Atlético’s victory on Saturday, reducing the difference to a point, before the Andalusian club brought it back to four points thanks to a double by Frenchman Nabil Fekir, knowing that the capital club has a postponed match.

Real Betis returned to the winning streak after losing to Villarreal in the last stage and now has 43 points.

The Argentine coach Manuel Pellegrini’s team almost missed the victory after he advanced 3-0 before finding himself in front of a 3-2 result, but Fekir settled the result with a fourth goal.

The Algerian player of origin opened the scoring in the match with a powerful left kick from outside the area, which bounced from the back of one of the defenders to deceive the goalkeeper and follow her way into the net (29).

Edgar Gonzalez scored the second goal for the Andalusian team when he reached the ball in front of the goal from a corner that he followed easily into the net (29), before adding the Portuguese William Carvalho III with a shot from the outskirts of the area on his right, crawling to the left of goalkeeper Dani Cardenas (42).

Danny Gomes reduced the difference before the break with a right-footed shot from inside the area (43).

Gomes ignited the beginning of the second half by reducing the difference to 3-2 when Jorge de Frutos hit the ball from a narrow angle on the right flank, Portuguese goalkeeper Rui Silva failed to deal with it to reach his colleague on the goal line and poke it into him (43).

However, Fekir settled matters with a fourth goal from a wonderful fixed kick, which was settled to the left of the goalkeeper (49).

Roberto Soldado was sent off in the 74th minute by the hosts for a harsh foul on Carvalho.

Real Sociedad reported Villarreal’s tie with Real Madrid on Saturday, and snatched it sixth place by defeating its guest Granada 2-0 with goals from Mikel Oyarsabal (37 from a penalty kick) and Brazilian Rafinia Alcantara after he hit a cross in front of the goal from the Spaniard, followed by an easy goal in the net (74).

The Basque club returned to the path of victories after two draws in the last two stages, raising its score to 38 points, behind Barcelona on goal difference and ahead of Villarreal by two points and with one game less.

Alaves scored an important 2-1 victory at home to Valencia in its quest to get out of the relegation zone with goals from Senegalese Mamadou Loum (14) and Joselu (76 from the penalty spot), while Portuguese Gonzalo Guedic scored the “bat” goal from the penalty mark as well (62).

Alaves raised its score to 20 points in the eighteenth place, compared to 30 for the twelfth Valencia, who remained without a win for the sixth match in a row in the league.

Tags: a tie, against, Barcelona, Derby, Espanol, in a, killer, snatch