Barcelona falls to a goalless draw with Galatasaray 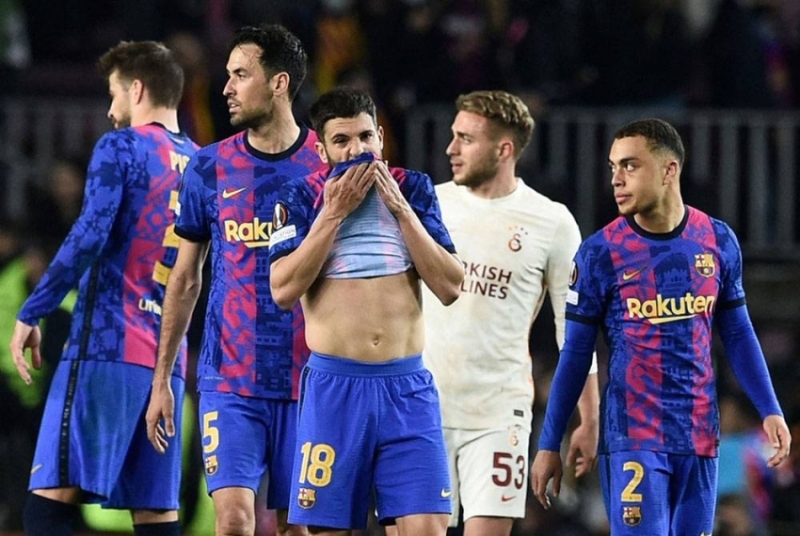 Barcelona, ​​led by its coach and legend Xavi Hernandez, fell into a goalless draw at home against Galatasaray, while Moroccan Mounir El Haddadi led Sevilla to victory over West Ham by scoring the game’s only goal on Thursday in the first leg of the European League’s round-up. Football (European League).

In the first match at the Camp Nou stadium, the Catalan team played the game excited by scoring 21 goals in the last seven matches in various competitions, an average of 3 goals per game, but it collided with an organized Turkish defense wall and behind it the brilliant Spanish goalkeeper Inaki Peña, who saved his goal from more than A definite goal, knowing that he is loaned from Barcelona in particular, and he has to settle the qualification in Istanbul on the 17th of this year.

Barcelona dominated the game, but Peña prevented two dangerous attempts by Dutchman Memphis Depay in the first half, before interfering to save his own goal from Sergio Busquets’ header (57) and a powerful shot from Dutchman Frankie de Young (64).

On the other hand, French striker Bafetimbi Gomis scored a goal for Galatasaray, but the referee did not calculate it after resorting to the technique of video assistant referee (78).

Barcelona thus failed to achieve its fifth successive victory in all competitions.

– Moroccan brilliance – In the second match, El Haddadi’s goal came in the 60th minute from a shot on the fly, taking advantage of a free kick by Marcos Acuna, knowing that he participated in the last minute after the injury of Croatian midfielder Ivan Rakitic during the warm-up period.

Al-Hadadi commented on this matter, saying, “This is football. Every player must be ready when the team needs him.”

“I did not have the opportunity to warm up enough, but I gradually entered the atmosphere of the match and I am happy with the victory,” he added.

In general, the other two Moroccans starred in the ranks of Seville, namely striker Youssef Al-Nusairi, who was a great burden on the London team’s defense, and goalkeeper Yassin Bono, who intervened three times to save his own goal against the Croatian Nikola Vlasic (10 and 29) and a shot from the Czech Tomas Socic (47).

Sevilla is considered a specialist in this competition, which has been crowned champion six times, and will have the advantage of reaching the next round when it is a guest of West Ham at the Olympic Stadium in London on the 17th of this year.

Seville is competing in this competition with an additional motivation, because its stadium, “Ramon Sanchez Pesjuan”, will host the final of the competition on May 18. And the Andalusian team has not lost any home match at the continental level against a foreign team since 2011.

And Braga beat the French Monaco with two goals from the Spaniard Abel Royce (3) and Vivitor Oliveira (89).

And the Scottish Rangers won a broad victory over the Serbian Red Star, 3-0.

It is noteworthy that Germany’s Leipzig officially reached the quarter-finals after the ban imposed on its rival, Spartak Moscow, in this role because of the Russian invasion of Ukraine.

The final price round kicked off on Wednesday with two matches, as Lyon returned with a valuable victory from outside its home against Porto 1-0, and Eintracht Frankfurt followed suit by beating Real Betis 2-1 away from its bases.

The Italian capital team was characterized by realism, as it scored its goal from only three attempts between the three woods by striker Sergio Oliveira in stoppage time in the first half, compared to 13 shots for the Dutch team.

Oliveira joined Roma in the last winter transfer market from Porto on loan.

However, Oliveira was sent off in the 79th minute for receiving a second yellow card, so his team completed the match with ten players, without the owners of the land being able to take advantage of the numerical shortage in the ranks of the guests.

The English Leicester City will enter the return match away from its stadium against French Rennes, with the advantage of goals scored by Mark Albrighton (30) and Nigeria’s Kelechi Ihyanacho (90 +3) in a match that was missed by the veteran winner’s top scorer Jimmy Vardy due to an injury that will keep him out of action for a month.

Eindhoven drew 4-4 with Copenhagen, Denmark, in an exciting match, in which the first was behind at home, 1-3, before equalizing 5 minutes before the end.

The French Marseille won an unreassuring victory at home against the Swiss Basel 2-1.

In other matches, Feyenoord Rotterdam of the Netherlands won a wide victory over Serbia’s Partizan Belgrade 5-2 in the latter’s hometown, Greece’s PAOK Thessaloniki over Belgium’s Ghent 1-0, and Czech Slavia Prague over Austria’s LASK 4-1.