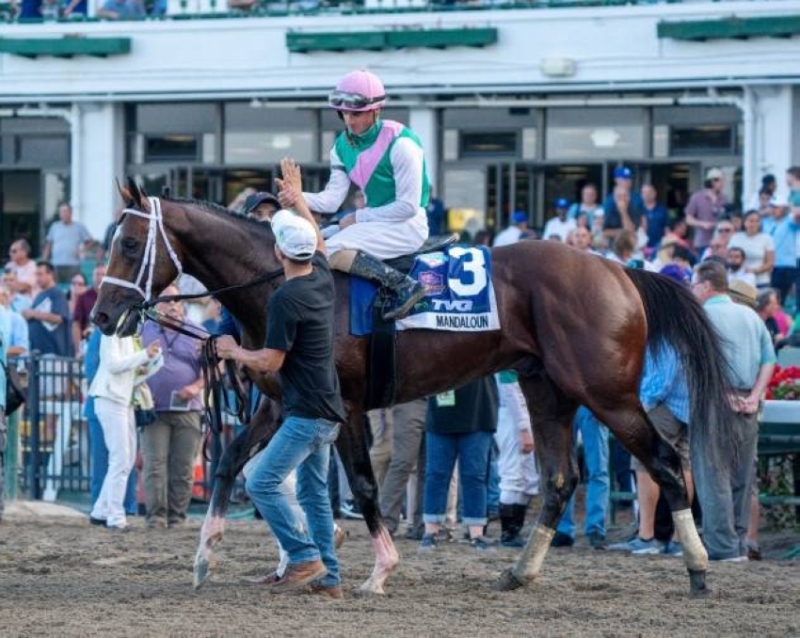 The two American racing champions (Mandalon and Midnight Bourbon) meet again to compete in the $20 million event, after combining the two competitions in the (Grade 3 Louisiana Stakes) last month at the Fairgrounds, when Mandalon took the lead by three-quarters of the length. .

The two champions will now face each other again in the Saudi Cup, which is the most expensive race in the world, specifically in the 1800-meter first category race, on the sandy ground in King Abdulaziz Square in Riyadh, Saturday, February 26.

The Louisiana Stakes was Mandalon’s first race since he won the Grade 1 Haskell Stakes at Monmouth Park last July, especially since Mandalon has returned to racing after an injury, and coach Brad Cox believes he is still improving ahead of time. His trip to Saudi Arabia to run the most expensive race in the world, as he explained that Mandalon had run a great race at Fair Grounds in (Louisiana Stakes), and it was his first race in a while, and it seems that he came out of it in good shape, especially since he trained well this Sunday morning, Where he made progress in performing the exercises, stressing that if his contestant continued in that progress, he would be of great strength and readiness in the Saudi Cup.

Speaking about his rider, Mandalon, the coach continued, “I always thought he was one of the first class horses, so it was important to us and Gudmont to win the first class and add him to the list of stallions.”

Regarding the chances of his horse in his race on the sand track, Coach Cox said: “I think that the track will be good, because the horse is able to perform what we want for it in the race. It can adapt to the pace of the race, whether it is slow or fast, noting the excellence of the Saudi Cup race (first category). – 1800 meters) by being single-cycle, because that is not common in America, as Belmont is the only place to run something similar to this race, expressing his confidence that his horse will be able to adapt, and returning the Saudi Cup race as one of the new races, but it attracted interest The whole world, without a doubt, has become one of the races that everyone is looking forward to participating in, and if we can win this cup for Gudmont, that would be great.

Although Midnight Bourbon finished behind Mandalon in the Louisiana Stakes and last year’s Kentucky Derby when he struggled, Midnight Bourbon coach Steve Asmussen is hoping his stable star can win this important race, as he was not so lucky in the His career, Paco Lopez fell to the ground when he got stuck while taking on the challenge at Haskell Stakes and his coach believes he has the potential to be a champion.

Coach Steve Asmussen confirmed that the horse Midnight Boron has what distinguishes him from the capabilities, which he did not fully exploit at this stage, as he had success on previous occasions, stressing his great confidence in the great capabilities of the horse Midnight Boron, especially that they have in the training team a lot To do it in the future, and to ensure that this hero horse will put it in the right position and its rightful place at the level of stardom, successes and titles. It is still in the stage of physical and mental development that qualifies it to become the best-trained horse in the world for this year.

Coach Asmussen continued his talk about his horse Boron, saying: “Midnight Boron is gradually moving forward, but his talent is present, and I am absolutely sure that he will give his best in the Saudi Cup.”

Fantasy Joel Rosario has ridden Midnight Bourbon in (Louisiana Stakes) and will continue to ride in the Saudi G1 Cup, and he will have to prove his distinction with the presence of a Mandalon, but coach Asmussen believes that last month’s race will enhance his hope of winning the big race, indicating that that race was just In preparation for the Saudi Cup, he came out of it in a better condition than it was before, as it allowed him to train very well, based on the observation of his training team from the preliminary preparations for his last race and his condition after the race and his performance since then, as the team made great progress with this horse And in sympathy with the numbers he achieved in terms of very excellent speed, which he showed distinctly from any horse in the world during training, stressing that they are looking forward to achieving the desired result, as Midnight Poron has matured a lot in his approach to training compared to what he was in the past, and he has done a great deal Well last Sunday at Fair Grounds, where he finished in perfect condition and got back on the track last Tuesday morning in great shape.

It is noteworthy that the two American horses will do everything they can to snatch the Saudi Cup title from last year’s winner and crowned horse, Musharraf, whose coach, Teddy Gosden, confirmed last Tuesday that the horse Musharraf is in excellent condition ahead of his participation in the most expensive race in the world.

Tags: and Midnight, bourbon, brilliance, Cup, in a, looking forward, mandalon, Saudi Arabia, The Americans, to me