Al Mafaraj: Our work is organized and we have big players 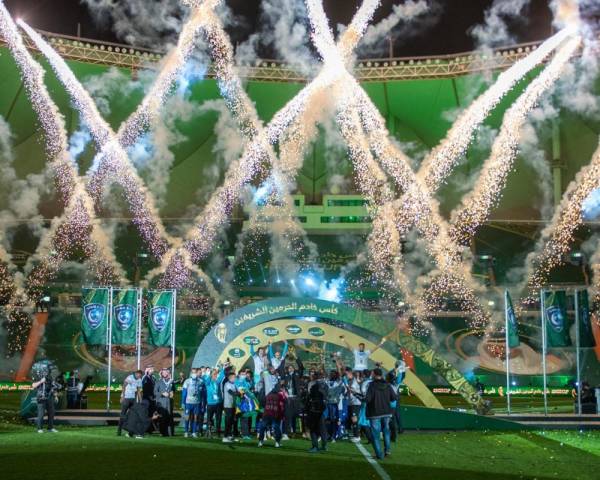 A member of the Board of Directors of Al-Hilal, Fahd Al-Mafaraj, affirmed that the Al Hilal team does not and will not stop achieving titles, achievements and numbers. The team is full of great players who have reached the stage of full football maturity and are able to deal with finals and crucial matches in various competitions.

Al-Mufarrej said, “We have a capable technical apparatus, which deserves thanks for its wonderful work, great professional performance, and players at the level of confidence, and they are always on time.”

Al-Mafarrej emphasized that Hilal is used to being on the coronation podiums, because we work in an organized and collective manner and we always have priorities.

Ibn Nafil: I was confident of the championship

The president of Al Hilal Club, Fahd Bin Nafel, congratulated the Al Hilal fans for obtaining the most precious cup, the Cup of the Custodian of the Two Holy Mosques, and confirmed that they worked hard and were keen to win this cup because of the name it bears dear to everyone.

Bin Nafl said: We were keen to win and I was confident of that, as I saw victory in the eyes of the players and I always watch in them the spirit of determination and challenge, as we prepared for this match well and got the cup.

He added: I did not feel tension throughout the course of the meeting and I was sure of victory, and now we are preparing for the next Thursday’s confrontation against Al-Fatah to complete the Prince Mohammed bin Salman Professional League.

The cup is in the eyes of the stars

The captain of the Al Hilal team, Salman Al-Faraj, expressed his happiness at their being crowned the Cup of the Custodian of the Two Holy Mosques and stressed that it is an exceptional season for Al Hilal Club, which gathered in the historic triple and dominated the championships, and Al-Faraj blessed this title to the fans of the club and said: I dedicate the victory in particular to my father.

Al-Faraj also confirmed that Al-Nasr is a big team and made a big match, but they succeeded in dealing with the match, winning.

He added: “Al-Hilal’s level is large, and we have achieved the triple level, and every team has a low level, but we offer good levels in all matches. We work with a great coach who brings together all the players and deals with them equally, and this is the 14th tournament that I achieved with Al-Hilal and perhaps more.”

Al-Hilal became the first Saudi team to win the historic triple “League-King’s Cup-AFC Champions League” after winning the Custodian of the Two Holy Mosques Cup title, after its victory over its counterpart Al-Nasr with two goals to one in the final match that brought them together, yesterday, Saturday, at King Fahd Stadium International in Riyadh.

The Hilali team started the 2019-2018 season with a continental achievement, when it won the AFC Champions League title for the first time in the history of the tournament with its new name, and continued the title march by winning the Mohammed Bin Salman Professional Cup League title, which it won two rounds before the end.

The blue team concluded its successful career by winning the most expensive championships at the expense of the traditional rivals Al-Nassr after a marathon season.