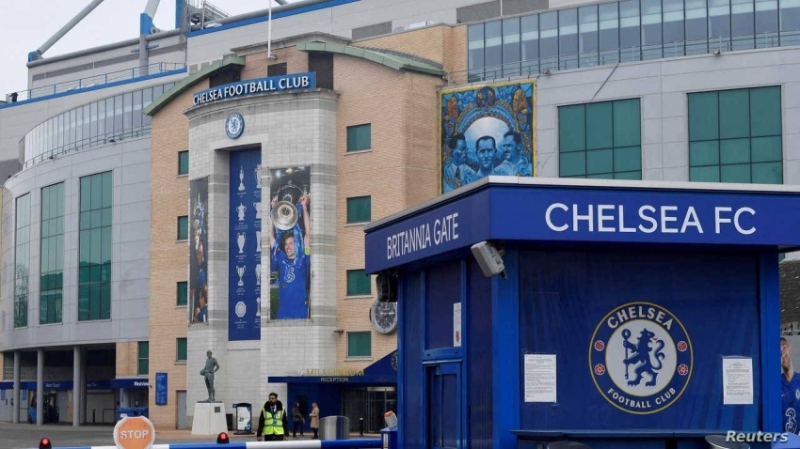 Less than a year after celebrating its second Champions League title, Chelsea FC entered the unknown after the British authorities decided Thursday to suspend its sale due to the sanctions imposed on its Russian owner Roman Abramovich and the freezing of his assets, against the backdrop of his country’s attack on Ukraine.

The Treasury said the restrictions “apply to any entity owned or controlled by Roman Abramovich,” adding, “This means that Chelsea Football Club is now also subject to an asset freeze under UK financial sanctions.”

The billionaire was one of seven Russian oligarchs who were sanctioned, including his former business partner Oleg Deripaska.

Abramovich announced last week that he would sell the club he bought in 2003 and funded his successes at the domestic and European levels.

The British government estimated his net worth at £9.4 billion, but said it would mitigate the impact of the sanctions on Chelsea by allowing the club to continue operating.

Neither the sale of the club nor the transfer of players are included in the list of permitted activities, which hinders the Russian’s desire to sell the London club.

In its first reaction to the authorities’ decision, the third Premier League said that “by virtue of its 100 per cent ownership of Chelsea FC and its affiliated entities, Chelsea FC is subject to the same sanctions regime as Abramovich. But the UK government has issued a general license allowing Chelsea FC to continue certain activities.” “.

“We will implement the commitments of the men’s and women’s teams on (Thursday) against Norwich City (in the Premier League) and West Ham (in the Women’s League) respectively, and we intend to engage in discussions with the UK government regarding the scope of the licence.”

“This will include seeking permission to amend the license in order to allow the club to operate as normally as possible. We will also seek guidance from the UK government on the impact of these measures on the Chelsea Foundation and its important work in our communities.”

Abramovich announced last week that he had made the “very difficult” decision to sell Chelsea, vowing that the proceeds would go to the victims of the war in Ukraine.

According to reports, Abramovich was still waiting for a bid of nearly £3 billion to sell the current European champion he had bought for £140 million.

Chelsea won 19 titles, including five in the Premier League and two in the Champions League.

But the London club, which is still competing in the Champions League and the local cup, finds its future in jeopardy, not only because of Abramovich’s departure, but also because of the procedures that will affect him and restrict his daily operations.

The license allows the club to continue paying staff and players’ wages and the costs of hosting matches at its stadium, “Stamford Bridge”, but the travel costs for matches abroad have been set at twenty thousand pounds per match, which may cause him a problem in his matches outside his home in the Champions League, the first of which is when he is a guest on the The French night, Wednesday, in the second leg of the final price (he won the first leg 2-0).

The first consequences of punishment

The first repercussions of the sanctions against Abramovich was the announcement by the telecom company “Three”, the official sponsor of the Chelsea shirt, to suspend its partnership with the London club due to the sanctions imposed by the British government on its owner.

A spokesman for the mobile network provider considered this temporary decision “the right thing to do” in light of the asset freeze and travel ban on the wealthy Russian businessman who bought the club in 2003.

The company “Three”, whose number the club bears on its shirts during its domestic and continental matches, pays 50 million pounds (about 60 million euros) annually.

No contracts, no new contracts

Chelsea can also continue to pay the money owed from transfers concluded before March 10, 2022, but no exception was granted to sign new players or agree to new contracts.

This means that he will not be able to renew the contracts of players such as his Spanish captain Cesar Aspilicueta and influential German defender Antonio Rudiger, and therefore they will leave him for free next summer.

However, the license period only extends until May 31, and therefore can be reviewed by the time the summer transfer window reopens.

Chelsea can get the money owed to the club from very lucrative TV contracts for Premier League and Champions League matches, but those funds will be frozen until further notice, raising questions about how the club will continue to pay salaries in the coming months.

Despite winning the Champions League last season, Chelsea lost 153 million pounds in the year ending June 30, 2021, due to the size of salaries, which amounted to 309 million pounds, even before the restoration of Belgian striker Romelu Lukaku last summer from Inter in a record deal for the club. It amounted to 97 million pounds.