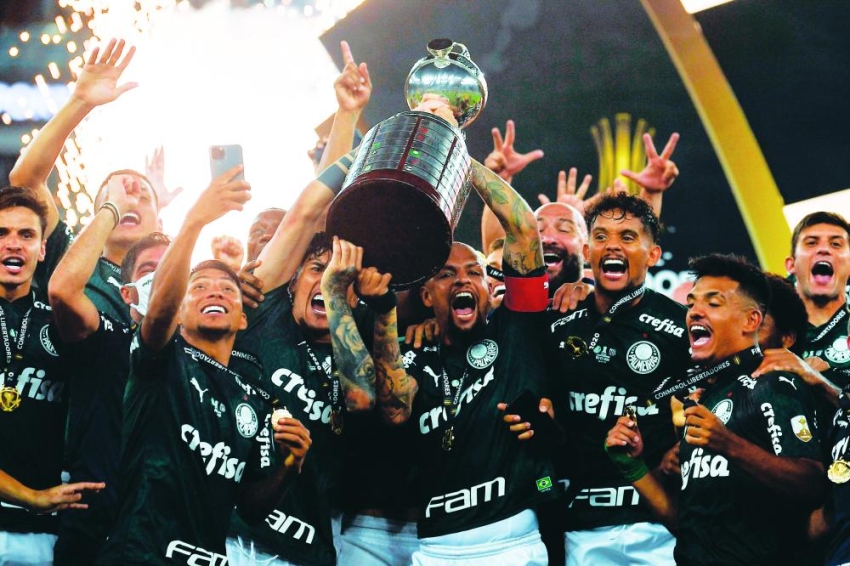 Brazilian Palmeiras won the Copa Libertadores for South American clubs, which is parallel to the Champions League in the European continent, for the second time in its history by beating his compatriot Santos with a fatal goal 1 – zero in the ninth minute of stoppage time Saturday at the Maracana stadium in Rio behind closed doors due to a virus Corona.

Palmeiras owes his first final Brazilian final since 2006 and winning his second title after 1999 when he beat Colombian Deportivo Cali on penalties, to substitute Perno Lopez, who entered the 85th minute and then snatched the winning goal in the ninth minute of stoppage time with a header following a Rooney cross.

Palmeiras deprived his local opponent, Santos, of his fourth title after 1962 and 1963 with Pele and 2011 with the current French Paris Saint-Germain star, Neymar, who scored in the final at the time.

And for the third time in four years, a Brazilian team was crowned after Grêmio in 2017 and Flamengo in 2019.

This is the third Brazilian final in the competition after Sao Paulo’s victory over Atlético Paranaense in 2005 and Internacional over São Paulo the following year.

The final was held for the second time in a row of one match, instead of the traditional two-way round, due to the repercussions of the Corona pandemic.

This purely Brazilian confrontation hosted the legendary “Maracana” stadium in the presence of only some of the invitees, which resumed its activity by hosting matches, after it played a health role at the beginning of the Corona pandemic by temporarily hosting a field hospital.

But the stands of the stadium in Rio de Janeiro, with a capacity of 80,000 spectators, remained empty in light of the difficult health situation in Brazil, as it is the second most affected country in terms of deaths (220,000 cases) after the United States of America.

Santos, who is currently ranked tenth in the Brazilian League, was betting on achieving the title for the fourth time and becoming the most Brazilian team winning the title and moving away from Sao Paulo and Gremio, which would allow him to strengthen his coffers with the prize money of $ 12 million for the winner, especially as he suffers from financial problems.

But Palmeiras, who was competing in the fifth final in his history, but the first since he was crowned in 1999, was deprived of that under the leadership of his Portuguese coach Aber Ferreira, who assumed the position last October, instead of Vanderlei Luxemburgo.

Ferreira, 42, the former Portuguese coach of Braga and former Greek side Paque, became the third European coach to win the title after Croatian Mirko Josic with Chilean Colo Colo in 1991 and his compatriot George Jes جs with Flamengo in 2019.

Next month, he will have a chance to lead the team to a second title when they play in the Copa do Brasil final against Gremio.

But he first hopes to achieve a successful career in the Clubs World Cup, which begins next week in the Qatari capital, Doha, and to win the title for the first time.