544 thousand .. The proceeds of the Saudi Falcon Club auction in its sixth day 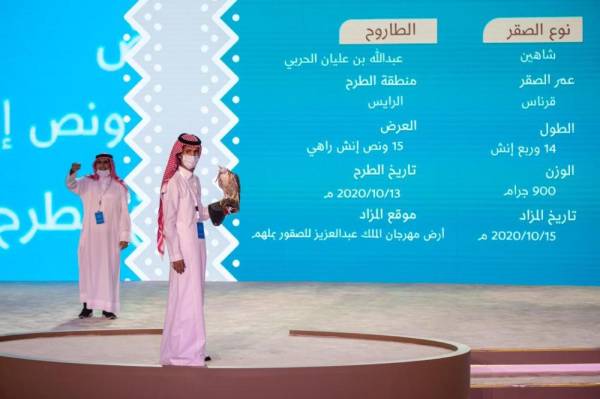 The Saudi Falcons Club auction continued its activities for the sixth day, offering 7 falcons, 4 chicks and 3 corneas, which were sold for 544,000 riyals, and this Thursday evening, on the grounds of the King Abdulaziz Festival, in Mulham, north of Riyadh.

The first falcon of the type “Farkh Shaheen”, by Al-Tarohin Saud Hamdan Al-Maabadi and Muhammad Mabrouk Al-Maabadi, which was launched in the Shuaiba region in the west of the Kingdom, and its length is equal to its width of 15 inches and a quarter, and its weight is 970 grams, and his deal went to Walid Nawar Al-Otaibi at a value of 85 thousand riyals.

As for the second falcon in the auction, “Shaheen Farkh”, it was for Al-Tarouh Khaled Deif Allah Al-Otaibi, also coming from Al-Shuaiba, which was launched last Tuesday, and its length is equal to its width of 15 inches and a half, while its weight reached 1050 grams, and Bandar Shayim Al-Anzi won it 171 thousand riyals .

While the third falcon “Shaheen Qarnas” was by Al-Tarouh Aziz bin Salman Al-Balawi, it was launched in Al-Wajh Governorate in the Tabuk region, and it is 14 inches and a quarter in length, 15 inches and a half in width, and weighs 1010 grams, and it was sold for 35 thousand riyals, for Falah Al-Adwani.

The competition was fierce against the sixth falcon Shaheen Farkh, which was launched in the Badr region, by Al-Tarouh Muhammad Suleiman Al-Subhi, who landed on its new owner Mishari bin Muhammad Al-Azmi with a value of 95 thousand riyals, and was characterized by length and width of 15 inches and a quarter, and its weight reached 912 grams.

As for the seventh and last falcon “Shaheen Farkh”, from the offering of the Al-Samman region, three torrents participated in his hunting, namely Abdul Hamid Muhammad Al-Anzi, Badr Qasim Al-Dhafiri and Nasser Mutair Al-Anazi, and it was sold for 80 thousand riyals, and it was the share of Muflih Abdullah Al-Qahtani, and its length reaches 15 inches, and its width It is 15 inches and a half, and it weighs 930 grams.

It is noteworthy that the Saudi Falcons Club announced that the seventh night of the auction will be held, on an exceptional basis, tomorrow, Friday, due to the presence of a group of falcons that have been offered in different regions of the Kingdom.